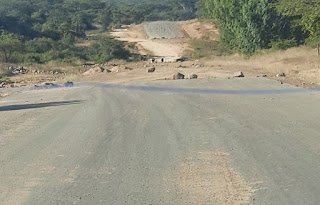 . . . as they struggle to ferry fresh farm produce to markets during Covid-19 pandemic

GUTU–Over 1000 farmers in Gutu North constituency are pleading with Government to complete the tarring of Gutu-Kurai road, saying the bad road network has affected them as they struggle to transport their fresh farm produce to Mpandawana town.

The Gutu-Kurai road is being tarred using Zinara and devolution funds, and when complete it will link Mpandawana and Buhera in Manicaland Province.

Farmers and villagers from Soti Source, Chiguhune, Domborenhikiti and Nyazvidzi as well as schools and clinics use this road to connect with Buhera and Mpandawana town.

Farmers who spoke to this publication said Gutu Rural District Council (RDC) and Government should prioritise the completion of this major road which is used by many farmers and villagers from Gutu North to connect to Mpandawana town.

“We have a number of horticulture farmers in Gutu North and they use this road to go and sell their fresh produce at Mpandawana. The government started tarring of this road sometime in 2018 if not before but up to now they have completed less than 10km. We have more than 10 000 families who are surviving through farming so we plead our RDC and government to prioritise the completion of this road,” said one farmer.

A supervisor at the site who spoke on condition of anonymity said the project is being funded by devolution funds and council was waiting to receive this year’s disbursement.

“Zinara funds are also being channelled towards this project but the challenge is that they don’t disburse the funds in time,” said one of the project supervisors.

There have been reports of abuse of the raw materials that are meant for the construction of the roads by workers who steal and divert the resources. One of the workers stole over 100 bags of cement that were later recovered by the police in Gornvile suburbs where they hidden.

When contacted for comment, Gutu RDC chief executive officer Alexander Mutembwa said the road was not under his jurisdiction, asking this reporter to contact the Department of Roads.

Efforts to get a comment from the provincial roads engineer were fruitless as his mobile phone went unanswered for days.