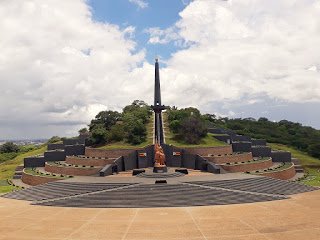 Robert Gabriel Mugabe ruled Zimbabwe
for 37 years from 1980-2017 and despite being shunned by many, the nonagenarian
had managed to protect the country’s legacy.
The late President fast tracked the Land Reform Programme which gave the
majority of blacks land ownership. Prior to that, land was owned in the hands
of the white minority.

Mugabe managed to elevate Zimbabwe
in the areas of education, tourism and hospitality and agriculture among
others.

The writer therefore noted with
concern that apart from being surrounded by selfish and power hungry people who
manipulated him, Mugabe heroism can never be taken away from him.

Although Mugabe some described him
as an ‘enemy of the revolution’ by the time of his death, the writer notes that
the call for the exhumation of his body for reburial at the National Heroes
Acre is vital towards rebuilding Zimbabwean history.

However, family members of the late
Mugabe including his nephew Leo Mugabe vowed that the exhumation was not going
to happen. He further accused the Chief and the government of attempts to force
Mugabe’s remains onto the Heroes Acre against the late president’s wish.

From the inquiries done by the writer,
many people argue that Chief Zvimba has connived with government to exhume the
remains of the late president for reburial at Heroes Acre in an attempt to
achieve their political own agenda.

The writer, however, views the
exhumation of Robert Mugabe’s body for reburial at Heroes Acre as something
crucial in the eyes of patriotic Zimbabweans.

The history of Zimbabwe without
Mugabe is incomplete. Mugabe was admired by many worldwide despite the fact
that he fell for a trap set by criminals who happened to surround him before
being dislodged through ‘Operation Restore Legacy’. Mugabe’s wife and her
cohorts in the form of the so called G-40 group drove Mugabe to Waterloo. The
current President Emmerson Mnangagwa has learned something from Mugabe in as
far as nation-building is concerned.

Mugabe was among the founding
fathers of Zimbabwe. The history of Zimbabwe thus is incomplete without the
likes of Tongogara, Chitepo, Mujuru(Rex and Joice), Muzenda, Zvobgo, Mavhaire,
Dabengwa, Nkomo, Chief Tangwena among others.

During his tenure of office, Mugabe buried
cadres at the Hero’s Acre thus honoring brothers and sisters who sacrificed
their lives to fight for the independence of Zimbabwe. Excluding Mugabe from
the Heroes’ Acre therefore, takes a lot of respect from it. The writer
therefore notes that Mugabe’s remains should be exhumed for reburial at the
Heroes’ Acre in a way to preserve the country’s history.

The move to bury Mugabe at his rural
courtyard was a ploy by Grace and her cohorts to settle scores by the new
national leadership given the way Mugabe was removed from power.

Even if Chief Zvimba’s call for the
reburial of Mugabe the Heroes Acre is a government’s project to achieve
personal agenda, it remains important that he be reburied.

It has come to the writer’s
understanding that although Mugabe has distorted the history of Zimbabwe in
some instances, the move to devalue ‘patriotic history’ has been fast-tracked
by the move to bury Mugabe at his rural courtyard.

Driven by the principles of nation
building, Mnangagwa then instigated the reconciliation agenda in a way to build
the nation and heal the country from past ills.

The national shrine portrays the
struggle for Zimbabwe’s independence and the writer is convinced that the
exhumation of Mugabe’s remains for burial at Heroes’ Acre would be an important
move towards the reconstruction of history.

espite different political
affiliations, Zimbabweans should consider their culture and customs which
shapes their history.