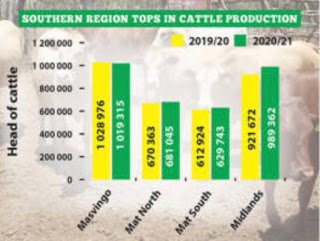 MASVINGO – The latest crop
and livestock assessment report released by the Ministry of Lands, Agriculture,
Fisheries, Water and Rural, Resettlement places Masvingo ahead of other
provinces in cattle production scale in 2020/2021 season.

He also praised improved
breeding methods by farmers as well as improved pastures due to the early rains
received this season.

He said farmers should
consistently dip their cattle to maintain their heard.

The southern region has
maintained dominance in the country with Midlands recording the cattle
production increase of 989 362 from 921 672, Matelebeleland South followed with
an increase of 629 743 from last season’s 612 924.

The report also states
that the grazing condition is fair to good across all provinces except for some
parts of Gokwe North, Zambezi Valley, Nkayi and Gwanda.

“Available grazing is
expected to last up to next season in most districts. However in the northern
parts of the country specifically parts of Gokwe North, Zambezi Valley, Nkayi
and Gwanda are likely to have grazing challenges.

“Generally, communal
areas will have shortage of grazing due to over-stocking and poor quality,”
reads the report.