The rise of Zim’s ‘Boyka’ 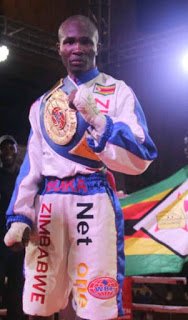 Clayton Shereni
Nicknamed
after the great Yuri Boyka, a
professional Russian prison fighter who appears as a hostile prisoner in the
film Undisputed, Brendon Denes popularly known as Boyka has lived to be a gem
in the boxing world as he has conquered Zimbabwe and Africa as a whole.
Inspired by former boxing superstars Victor
Masunga and Wilson Mukungunugwa, Boyka started his boxing career at the age of
17. At this tender age, Boyka could not get any support from his family who
kept on telling him to pursue academics seeing no future in sports.
But who can blame the family as no one has ever
really made a living through boxing as the sport is not fully supported in the
country. The country has a bias towards soccer which has struggled and keeps
struggling to get international or regional recognition.
Zimbabwe now needs to invest in more sporting
disciplines and support young talent like that of the rising superstar Boyka.
In recent memory, the only boxer who has
managed to make a name for himself during the most difficult of circumstances
is Charles Manyuchi who happens to have roots in Masvingo.
Zimbabwe should be ashamed when boxing
heavyweights like Derick Chisora, who originally is from Zimbabwe but now has
an American citizenship, leave the country to seek better opportunities and end
up raising other flags up high instead of ours.
In an exclusive interview with TellZim News,
Boyka said he had to fight against all odds to realise his dream as no one in
his family approved of his talent saying the sport is normally associated with
rowdy behavior.
“When I started boxing I was staying with my
late grandmother and she didn’t want me to box because there were some
notorious boxers in our community by that time. This made people view boxing as
an evil sport.
“I used to sneak out even at school to pursue
my talent but everyone kept telling me to focus only on academics but I felt it
in me that one day I will be on top of the world through this sport. Boxing is
just like any other sport but people view it with a lot of stigma,” said Denes.
Denes paid tribute to Manyuchi whom he said
helped him learn the ropes and kept on encouraging him to pursue his dream no
matter how hard it may get.
“Charles Manyuchi assisted me and made me a
national amateur boxing icon after several wins in the Southern region and
National youth games” said Denes.
Currently signed with the Charles Manyuchi
Boxing Academy under the mentorship of coach Ali Otto Phiri, Denes has
registered eight straight wins as a professional boxer and also clinched the
World Boxing Federation lightweight championship recently in Harare where he
defeated a Malawian.
Denes said his career is a success because of
his handlers and also thanked Great Zimbabwe University (GZU) for their
unwavering support to his passion and dream.
“I wouldn’t be here without the help of Charles
Manyuchi boxing academy which has supported me since day one of my career.
“GZU has allowed me to start a boxing club where
I will help other upcoming boxers. Dean Sarafina Mudavanhu has always been
there to advise me and she has been instrumental in my career,” said Denes.
Denes recently met with the Minister of State
for provincial affairs Ezra Chadzamira who affirmed his unwavering support to
the young boxer.
In his amateur record Boyka has a superb record
of 52 wins out of 54 matches losing only two and also has 17 gold medals from
national and regional youth games.
Denes grew up in the ghost town of Mashava
where he did is primary education at King Mine and later moved to Kwekwe for
his secondary education at Rutendo High School.
He later transferred to Temeraire High School
in Mashava his home town before moving to Chibi High School where he finished
his A level studies.
Denes recently graduated at GZU with a Bachelor
of Science Honours Degree in Politics and Public Administration and was awarded
the best graduating athlete at the institution.
He will be facing South African based Tawanda
Chigwida in a non-title match at Harare Showgrounds on the December 21 this
year.
Share
Facebook
Twitter
Pinterest
WhatsApp
Previous articleGweru mayor launches half a million dollar Christmas Cheer Fund
Next articleCouncil approves $100 000 ward development fund