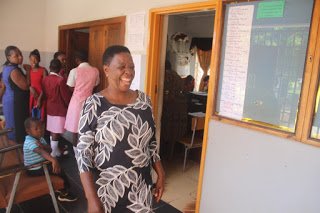 e a raging ocean tide, Ndarama High School is continuing on its course of astoundingly unstoppable rise, this time emerging mightier with an impressive 76.25 percent overall pass rate in the 2016 Zimsec ‘O’ Level examinations.
The government school has gradually but consistently nurtured its own unique identity of striving to beat its previous best and has distinguished itself among many, a character which has won it unparalleled awe among all government schools in the province.
The latest achievement means the school’s pass rate has grown by 8.75 percentage points from its 2015 best, a remarkable feat for a day school that uses the hot-sitting system to accommodate its many pupils.
Last year, 240 pupils sat for the 2016 ‘O’ Level exams at the school and a total of 45 pupils managed to obtained five As and above.
The best performing pupil, Praise T. Sombi got a whopping 12 As after having sat for 12 subjects, an extra ‘A’ ahead of previous record of 11 As.
On second position is Phillip Muzenda who got 11 As and one B, followed by four other star pupils; Shingai L. Sabata, Tafadzwa B.  Mabeza, Lawine Chiradza and Anesu Mavhima who all bagged 10 As and one B.
The critical STEM subjects; Maths, Physical Science and Biology were overwhelmingly passed while computers studies recorded a clean 100 percent pass rate. Technical graphics was passed by 66.7 percent.
Ndarama High School head, Shirley Makausi said the school will stop at nothing in its quest to mould the best out of all children who show faith in the school.
“We are pleased by this latest achievement, but we are equally aware that this is definitely not the absolute best that we can become. With the kind of hard work and an unbeatable team spirit that we enjoy here, we can always surpass all expectations,” Makausi said.
She said she was particularly delighted that girls are increasingly proving their mettle at the school, with three of the four pupils who each got 10 As and one B being girls.
“We are a government school and we fully subscribe to the wider agenda of the advancement of the girl child through education as a way of beating poverty in the long term,” said Makausi.
Deputy head, Lawrence Mukawu said the latest results, and all others in the past, are reflective of the dedication and hard work of teachers and all staff members against the odds.
“Our results have shown a consistent improvement, thanks to the collective efforts of our teachers and every staff member who did their part to make this happen. We are happy not only because the number of pupils who passed has increased, but also because the quality of the results has greatly improved. We believe in excellence,” said Mukawu.
Despite the biting economic conditions prevailing in the country, the school is continuing to mobilise resources by working with parents and other stakeholders to build a state-of-the-art ‘A’ Level science laboratory block as part of efforts to upgrade science learning at the school.
Ndarama High School’s hot seating system currently has two batches of pupils attending school; those who come in the morning and leave after midday to accommodate the afternoon classes.
The school, however, has hopes of expanding the school by building new structures so as to accommodate more pupils and give them more study time without lowering standards.
Built in 1984 as part of the government’s drive to bring affordable quality education to the vast majority of the people, Ndarama High school has steadily risen as one of the best day schools in the country with quality structures and squeaky clean surroundings.education
Share
Facebook
Twitter
Pinterest
WhatsApp
Previous articleAFM Mapanzure assembly acquires new truck
Next articleDokora, who really do you think you are?