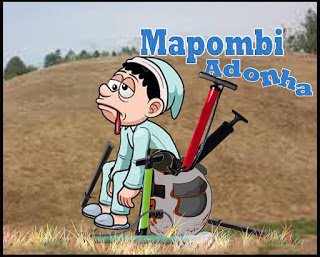 A sad day for democracy

Mapombi
is back again and I write to you today with a heavy heart. I am sure most of
you are aware that yesterday was indeed a sad day for democracy. The people’s
will was once again been subverted by baboons in Parliament. But why Zimbabwe?
What have we done wrong to deserve this kind of madness? Why give so much power
to one paranoid man? Yes, I will say it without fear or favour, ED is a
paranoid man, a true Dambudziko and unfortunately we are stuck with this man
until 2030.  Ana Wasu kumakomoyo muriwadi
here. PaGweru apo Mapombi anoti mufaro kwamuri. Chiredzi, Chivi, Bikita, Gutu,
Mwenezi and paZaka rinopisa I hope I find you well. Masvingo and Midlands I
hear ndimi makatizvarira Dambudzo but rest easy because Mapombi forgives you.
Hakuna musha usina benzi kkkkk.

I am
sorry to disappoint readers from Masvingo who thought that Mapombi would dwell
much on our incompetent city council which is now majoring on trivial issues
and not giving water and other services to residents. Mapombi thinks that there
is a lot of incompetence at the city council and ipapo I don’t want to hear
anyone achipomera Chamisa kuti ndiye atadza because hapana kana councillor
waChamisa umwe pacouncil. Mwonzora fired all Chamisa councillors and the
remaining are all loyal to Zanu PF. So it is not correct to say that the City
of Masvingo is dominated by Chamisa councillors. I hope ipapo pari clear before
ndapinda muvhangeri ranhasi.

I hear
our dearly beloved President ED has plans to put in place an inter-ministerial
taskforce led by Chiwenga to run all the opposition led local authorities. I am
not sure if ED is aware that there are a lot of councillors who have been fired
and this has had ripple effects on service delivery. How do you expect services
to run smoothly when councillors get fired by someone who just wakes up on the
wrong side of the bed or who would have fought with his wife and decides to
urinate on the electorate. Mr President are you aware that by-elections have
been suspended indefinitely and people are not able to choose replacements for
their expelled representatives? Are you also aware that Zanu PF is doing its
internal elections yet you have banned by-elections under the pretext of
Covid-19? So Covid-19 can only stop by-elections but not primary elections.
When it is convenient to you, you raise the Covid-19 flag. This nonsense must
stop and we need by-elections now so that our people are afforded a chance to
choose their representatives.

I do
not agree with ED when he says the local authorities are run by opposition.
Yes, the opposition may have the numbers but they do not have any power. Power
rests with management and the central government. Management is known to be Zanu
PF and the central government is the minister who is also Zanu PF. These are
the people with real power kwete twuma councillor twusina kana power utwu. If
things go wrong I think the central government should shoulder the blame kwete
kuda kukandirana nyoka mhenyu. The local authorities have failed I agree but
this is a reflection of what the central government is
doing. Imagine here in Masvingo we are failing to get water and we have
literally become a rural city because we are fetching water in the sewage
invested Mucheke River and boreholes. At least kumusha vari nani because their
rivers and boreholes are sewer free. We hear the problem at the moment is a
Zesa transformer so I wonder how a whole city can be held at ransom and go for
months without water all because of a transformer when we have a government
which can splash millions of dollars on a chopper for one paranoid man.

This is
not my story for today but zvinobhowa I tell you. We need to put our people
first in all we do. City council yedu ine madazvananawo futi. We are in a
double tragedy. The central government is a failure zvotiwo the council
management and the remaining councillors are all incompetent. Imagine they paid
over US$2 000 to Auxillia Mnangagwa’s useless traditional cooking competition
yet guta harina mvura. Hooo murikutowana henyu yekupa First Lady muchitadza
kudeliever services we are paying for. And you hear chimayor ichi chinonzi
Maboke kupupa furo trying to defend zvinhu zvavakaita kkkkk. This mayor of ours
mashura chaiwo. You paid the money simple. You have been taught by Zanu PF to
deny everything nxaaah. Maboke please if you have nothing better to say please
shut up. We want you to account for that money. If ED is serious about his
inter-ministerial taskforce I think he should experiment with Masvingo because
I tell you the whole city is sitting on a health time bomb. Tichayeuka bako
mvura yanaya hedu. This council must be dissolved and the entire management
fired kwete kudzinga Gozo ega. I think Gozo is the happiest man now wherever he
is. Things actually went from bad to worse after the suspension of Gozo. Now we
hear pane factionalism and sabotage which has affected service delivery kkkk.
We cannot let these guys continue to lead us down a cliff. They should simply
go. The PR officer onziwo is under investigation for dating Cde Tiringindi
kkkk. The drama just doesn’t end. How can service delivery improve under such
conditions? It is a shame.

This
country is truly cursed and if anyone ever doubted I am sure you can clearly
see with what those guys did in parliament yesterday. What is wrong with the
people driven constitution which is literally still new and has not been fully
implemented? The people said no to constitutional amendments but those fools
still voted for the amendments. This is a sad day for our democracy. A day that
will forever live in infamy. We know some may argue that Zanu PF has the
parliamentary majority and can pretty much do whatever it wants but is that how
it is supposed to work? Why should we amend something which we haven’t even
implemented? Why should we give so much power to one man? This is how we create
dictators. We all said Mugabe was bad because we created the animal in him but
we are doing the same again with ED. People are struggling and you are busy
amending the constitution. If in the end you end up doing what you want then
why do you waste resources coming to the people asking for our input if you
know you don’t listen to our views at all.

My
heart bleeds because of what was done by our parliamentarians. Why create a one
centre of power? These are the same guys who told us they were the new
dispensation when they are actually new wine in the same old bottles. To be
very honest what is wrong with the running mate clause? Tongoramba tiripo
pasuccession disputes here varume. What does the country have to lose if we put
our judges through public interviews? You take all that and put it in the hands
of one man mune shuwa here vanhu imi. Why did we even bother to write the new
constitution if no one cares about it? Very soon these guys will advocate for
the removal of the presidential term limit. They will call for a referendum to
have it scrapped and will campaign for it to pass. Unfortunately our people
have become so extreme and see everything with political lenses and very few if
any see the voice of reason. This has nothing to do with Zanu PF or MDC, it has
everything to do with our democracy. Can we really standby and watch why while
these goons trample on our constitution? Constitutions are legal chains we make
in our moments of sobriety to bind us in our moments of madness. We are getting
rid of the chains so what will bind these leaders now? Toitasei nevanhu
vanochinja constitution. Toitaseiko kkkkk. Think about it Zimbabweans, think
about it. I have said enough regai ndinokanga maputi angu for lunch. Mboko
imboko.