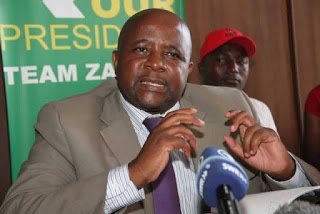 MASVINGO – When former President Robert Mugabe was forced out of
office by a military intervention in November 2017, the accusations were that
he was surrounded by criminals.
In the process of targeting those
criminals, Mugabe was forced out of office, a development which one can refer
to when analysing recent pronouncements by Zanu PF youths league boss Pupurai
Togarepi.
Togarepi last week came out guns blazing;
alleging that incumbent President Emmerson Mnangagwa was also now surrounded by
criminals.
The Gutu South Member of
Parliament (MP) issued a chilling warning to the ‘criminals’, telling them to
stop sabotaging the Second Republic.
In a public statement, Togarepi
said Mnangagwa’s Vision 2030 was under siege from economic saboteurs that he
claimed were within and outside of Zanu PF.
“We were hopeful that
collectively as a nation, we would change and embrace the Second Republic and
its clear vision as enunciated by President Mnangagwa and we had a place for
everyone to ride on the train towards making this country a middle income
economy by 2030, but all the goodwill is fast dissipating as spoilers get back
to their default mode.
“Indeed, the more things change
the more they remain the same and that our people especially those in
leadership positions, be it in business or civil service are rigid and live in
a time warp with criminal mindsets and evil intentions.
“The country has correctional
facilities that are ever ready to accommodate criminals, and we have the list
of rich criminals who soon will have their day in court and find new homes in
places like Chikurubi where they rightly belong,” said Togarepi.
Togarepi said a moment of
reckoning was coming and there will be no sacred cows when the birds come home
to roost.
“A name and shame ceremony is
brewing and those who are sabotaging the Second Republic will find themselves
in places where they really belong. Forewarned is forearmed. We are aware of
these people and some occupy very high offices.
“These people will be unmasked
and the full wrath of the law will take its course because we will not allow a
few rotten apples to hold the nation at ransom. Restoration is a process that
includes total sacrifice and dedication and as a the vanguard of the party we
are prepared to bite the bullet and blaze the trail, lest we will be condemned
by future generations as the weak link that impended growth and dined with
enemies of the republic, both within and outside,” said Togarepi.
He said the Zanu PF youth league
will not hesitate to take matters into their own hands to deal with the cartels
who are profiteering while the masses suffer.
“Some profiteering elements have
created cartels and syndicates that are manipulating the economy and they are
earning millions while the broad masses suffer.
We are saying that has to stop or we as the Zanu PF youth league, we
will take the matters into our hands and strip those unscrupulous empires that
are being built with stolen money.
“Selfish tendencies by some in
both the private and public sectors should be dealt with ruthlessly,” said
Togarepi.
Togarepi’s threats come at a time
when the country is groaning under serious economic challenges that have seen
all sectors affected with no solution in sight, amid reports of an impending
uprising from the long suffering masses.
Share
Facebook
Twitter
Pinterest
WhatsApp
Previous articleMasvingo Council management blows Nyaradzo road money
Next articleZUVA celebrates BSI certification