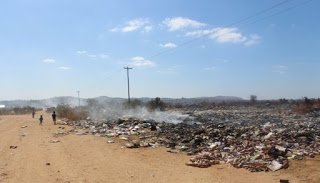 Council dumpsite headache far from over

City of Masvingo suffers dumpsite headache for too long and it seems far from over as residents in Runyararo and Victoria Ranch have to endure seven more months before a new dumpsite in Cambria Farm is opened.

Addressing journalists on Monday, May 31, soon after full council meeting Masvingo Mayor Collen Maboke said the dumpsite has become a menace and needed to be dealt with urgently.

“The need to expedite the development of the new landfill in Cambria Farm was reemphasized by the Health, Housing and Environmental Services committee as the dumpsite is now a nuisance,” said Maboke.

Runyararo West and Victoria Ranch residents have for long complained about the stench, flies and smoke which come from the solid waste dumped at the old dumpsite which is less than 200m from houses.

Masvingo City Council however promised that this will be a thing of the past as they will be decommissioning the dumpsite this year.

“We secured land to setup a new dumping site and we will be done by end of 2021. I was briefed that we are waiting for an Environmental Impact Assessment (EIA) which is done by the Environmental Management Agency (EMA), then we will be good to go,” said Maboke.

“The council has been saying the same thing for the past few years, what surprise us is that they are not moving to the new dumpsite. What is stopping them from going there? We want to see action so that we end this health scare coming from flies and smoke which is being faced by residents,” said Mutimba.

A Runyararo West resident said they welcome the development but hoped the city fathers will deliver their promise this time around.

“The plan of a new dumpsite is acceptable and as residents this is what we have been calling for all along. We have been exposed to dangerous gases when we inhale the smoke which comes from the dumpsite. We just hope the council will do as they promised this time around,” said the resident.

The dumpsite has of late become a hive of activity as people scavenge for scrap metal and recyclable waste.

Some have set their bases at the site where they will be setting fires during the night to keep themselves warm.