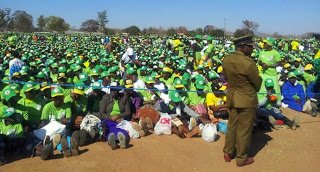 Political battles within grassroots structures are deepening in Masvingo province as in fights have reportedly erupted in the ZANU PF camp which saw the meeting held in ward 3 this week turning into chaos as the ward chairman Alfios Choweni pumped fists into the ward’ political commissar Jennifer Bhenyu.
Bhenyu was assaulted after she challenged Choweni for being a member of team Gamatox and for that reason the chairman was not worthy to stand in front of the people to address them on matters of ZANU PF.
Team Gamatox is referred to as the virus which had corrupted ZANU PF from within with the intention of usurping power from President Robert Mugabe for which at the moment those affiliated to this team are to be stripped of their leadership positions.
Bhenyu made it clear that Choweni was a member of the ousted Mai Mujuru faction and should be ousted as well together with other ward members who share the same affiliations. Choweni could not handle his tamper after hearing this and rained fists on Bhenyu.
Fadzai Bozho, Secretary for ZANU PF Women’s League confirmed the event and said the fist fight sparked as Choweni felt undermined by Bhenyu’s sentiments.

“Choweni just felt undermined that he was directly pin pointed that he is foolish and a Mujuru ally as he is well known to be a staunch Mavhaire disciple which makes him not worthy to address party issues”, commented Bozho.
Bozho went on to say that there are other members of the Gamatox team who are still in the party structures that are causing confusion which is why they want them to step down. She also blamed Choweni for calling for a meeting to address issues that happened at the ZANU PF’s National People’s Congress in December 2014 at a late date.
“There are people who are associated with team Gamatox and are still holding positions in the party structures, we want them out. These people are causing confusion in our party. How can the chairman call to inform us about what happened at the congress 2 months later, this shows lack of commitment”, added Bozho.Local
Share
Facebook
Twitter
Pinterest
WhatsApp
Previous articleGoat gives birth to a human-like creature at Chivi growth point
Next articleThree MPs, DA complain over Zaka Chief’s abuse of office