Knives out for Bishop Mutendi 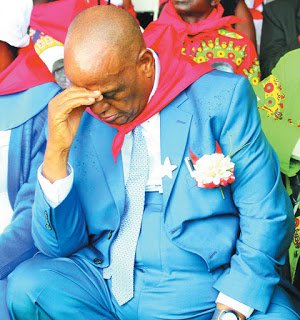 ‘Then Moses stretched out his hand over the sea; and the LORD caused the sea to go back by a strong east wind all that night, and made the sea into dry land, and the waters were divided. So the children of Israel went into the midst of the sea on the dry ground, and the waters were a wall to them on their right hand and on their left’ (Exodus 14: 21-22)

Then the Lord said to Moses, “I will rain down bread from heaven for you. The people are to go out each day and gather enough for that day (Exodus 16:4)
In fact, those who did not go to Sunday school might not know that the biblical Moses is the only man who saw God – he was God’s friend for they could have conversations at any given time.
Many Christians believe that no man born of a woman has managed to outdo Moses but the Zion Christian Church leader Bishop Nehemiah Mutendi has a different view.
Speaking at President Robert Mugabe’s birthday bash at Great Zimbabwe monuments recently, Bishop Mutendi said the Zimbabwean veteran leader has done far more than the biblical Moses.
In his own words, the Bishop said Mugabe did what biblical Moses could not do. Thus a man of God who commands a huge following throughout Zimbabwe believes that Mugabe is even closer to God as compared to Moses.
Since Mutendi himself is a prophet, thousands of people who gathered for the 21st February Movement celebrations were left wondering if the bishop was in a trance when he uttered the words during the devotion.
Although it is common knowledge that politicians bootlick their leaders as they try to curry favour with them, sometimes going to an extent of stooping as low as announcing how they wish to be Mugabe’s children, such a practice is unacceptable from a man of cloth.
Webster Shamu of the ‘Mugabe is Cremora’ fame once shocked people when he narrated how he wished to be Mugabe’s biological son. However, Shamu could be understood as a politician because he was ‘singing for lunch and it was again not surprising to see him dancing for his supper – that’s how politicians survive anyway.
Historians, philosophers and pastors attacked Mutendi saying he took people for granted and chose to insult them through bringing unnecessary comparisons.
Dr Takavafira Zhou had no kind words for Bishop Mutendi.
“Mugabe was not the chief architect of the liberation war but you can not dispute the fact that he played a critical role especially in the late 1970s. Even after independence, Mugabe was good but not from the 1990s when he lost his visionary leadership and started to drive people back to ‘Egypt’.
“There is nothing good about Mugabe to talk of today… He (Mugabe) has successfully turned this country to an extension of his kitchen. He literally took us back to captivity. Mutendi is guilty of selective forgetfulness … to some all of what Mutendi said was silly and nonsensical,” said Dr Zhou.
But Dr Robson Wuriga, a philosopher chose to be diplomatic saying people needed to understand Mutendi’s background before they criticised him. Dr Wuriga said Mutendi was coming from Zionism which believes in monarchy and chieftainship. He said it was obvious that a man who is treated like a chief in his own church would see Mugabe as a king.
“For Mutendi, Mugabe is not a President, he is a king and in Zionism, you don’t say anything bad about the King. The king is praised, he should live longer and there is no one born before and now who can be better than a reigning king. Even in his church, Mutendi is called Vashe rather than pastor or Bishop hence he chose all superlatives that would please a greater king – Mugabe,” said Dr Wuriga.
However, pastors who spoke to this publication said they were pained by Mutendi’s comments.
According to Reverend Prosper Muzambi, the Bishop went offside and what he did was next to blasphemy.
“Those who studied prophecy would tell you that no one can be equated to Moses. I have no problem with comparing Mugabe to any other prophet in the Bible but not Moses. Yes President Mugabe has done great things as a visionary who inspired a lot of people but it’s mischievous to say he is greater than Moses,” said Rev Muzambi.
Herbert Chikosi a social commentator said Bishop Mutendi showed a lack of bible knowledge.
“One thing was clear… the Bishop displayed his shallow Bible knowledge. We urge him (Mutendi) to keep away from politics since he is not a politician,” said Chikosi.
Christian Voice International Zimbabwe president Prophet Clement Zenda said  Mutendi’s whole statement was in bad taste.
“The President has played his role as the leader of Zimbabwe and this far he has taken us but the exegesis to idolise him is totally unacceptable,” said Zenda.
But Great Zimbabwe University (GZU) chairperson of the Department of Religious Studies and Philosophy Jowere Mukusha defended Mutendi saying Mugabe outperformed Moses.
“I think Mutendi was right because we saw what Mugabe did… I am sure in our context, Mugabe did miraculous things. Moses did miracles of his own time but Mugabe also did his fair share so don’t rule him out,” said Mukusha.
Efforts to get a comment from Mutendi were futile.
Share
Facebook
Twitter
Pinterest
WhatsApp
Previous articleZPS officer, Tongaat manager perish in a car crash
Next articleLocal governance and women exclusion, Masvingo’s experience