Masvingo’s broken pumps are only 3-years-old 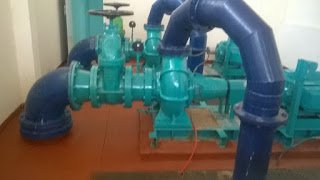 Picture: The new Indian-made pumps that have since broken down

The water pumps that broke down on August 22, leading the ongoing severe water shortages in the city are only three years old, TellZim News can reveal.

The pumps were commissioned by President Emmerson Mnangagwa, who was then vice president, on Friday April 24, 2015 after the completion of upgrades at the Bushmead waterworks.

The upgrades, which also extended to the sewerage works in Eastvale as well as the Rujeko sewer pump station, were made possible through money raised by the Zimbabwe Multi-Donor Trust Fund which was being managed by the African Development Bank (AfDB).

The donors were wealthy Western countries that included Sweden, Norway, Denmark and Australia.

At the Rujeko sewer pump station, a massive generator was put in place to make sure that the system is never deprived of power even during load-shedding, thereby ensuring that no untreated effluent flowed into Mucheke River at any given time.

People were also told that efficiency had also been improved at the sewerage works through upgrades and capacity expansion.

At Bushmead, two brand new Indian-made pumps were installed to replace the old Rhodesian pumps that were reportedly put in place way back in 1967, meaning the old pumps had served the city for 48 good years.

A whole new Indian-built electrical system was also installed to power the ‘better’ pumps that had just been installed.

On the day of the commissioning of the new upgraded systems, City of Masvingo engineer Tawanda Gozo led the tour of Bushmead, telling Mnangagwa and his delegation of ministers that the water situation in the city was never going to be the same again.

He said a third reserve pump had also been installed at the intake tower for use only in emergency situations.

It is against this background that many people were outraged to learn that what they had hoped to be a long-term improvement of the water situation in the city was somehow a farce.

Outgoing City of Masvingo town clerk, Adolf Gusha communicated last week that the new pumps had broken down unexpectedly, hinting that the equipment was substandard.

“The broken down pumps are fairly new; less than five years against a design lifespan of 20 years. At the moment, we are focusing on repairs. Getting a new one will take much longer. It’s an option on the horizon. A new pump could cost anything north of $300 000,” Gusha said.local