Mavhaire says Mugabe did not kill even a bird during war 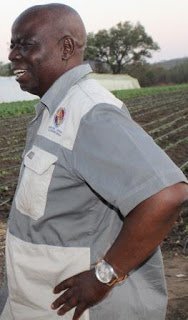 Firebrand politician and probably the most senior member among the sacked Zanu-PF cadres in Masvingo,  Dzikamai Mavhaire,  of  the Mugabe must go fame opened up recently and discredited his former boss President Robert Mugabe saying he never killed even a bird during the liberation war.
Mavhaire who has been in and out of government since 1980 due to his sharp tongue said he was no longer interested in going back to the revolutionary party describing the President as a man who shunned advice until he became useless to both the party and the country.
Although Mavhaire was very vocal in denouncing President Mugabe openly, he said it was not him alone who wanted Mugabe to rest while he was still commanding some respect from the people of Zimbabwe.

“It was not myself alone…a lot of people wanted the President to retire then. It is only that I had the courage to say it in parliament in 1998 and they perceived me as an enemy and I was fired from the government.
“I bet you that had he (Mugabe) cared to listen to my advice in 1998, today that man was going to be a small god on earth …look now rangova bepa (he is just a paper),” said Mavhaire.
Asked whether he harbours ambitions to bounce back into the government as was the norm in previous times, Mavhaire said he was already fed up.
“No no I will not go back, enough is enough. I was with them for 35 years and I think we have parted ways for good,” said Mavhaire.
Although he was not clear on the exact political path he was following, Mavhaire said no one will take away the fact that he went to war and fought for the liberation of the country.
Turning to people who believe that it is often cold outside Zanu PF, Mavhaire said it is only those who have never been out who think that life outside Zanu PF is difficult.
“Ask all those who are out…they are happy with their lives. I am satisfied outside than inside. It is warm here and very cold inside. I have since gained weight,” added Mavhaire.
Mavhaire said under normal circumstances, political life should be very short. People must have the habit of joining politics and pass on the button so that others can take over.
“We should not be concentrating on active political life without ending. Political life should come to an end so that we do other business… the major problem that we have is that we have politicians who do not have any skill or some kind of expertise hence these people fight to hang onto political positions for life.
“We should thrive to have politicians who add value to the country…we should discourage a situation where people campaign to be get political posts in order to earn a living,” added Mavhaire.
Share
Facebook
Twitter
Pinterest
WhatsApp
Previous articleChiredzi businessman constructs shopping mall
Next articleCroc chases grade two pupil for 2km