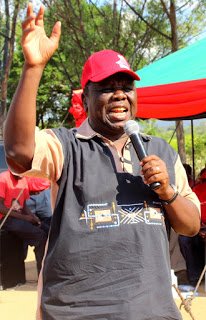 Upenyu Chaota
The Movement for Democratic Change (MDC-T) led by Morgan Tsvangirai has laughed off at attempts to detract them after streets in Chiredzi last week woke up with People First fliers prior to Tsvangirai’s rally.

The fliers portrayed Tsvangirai as a failure and that his followers should join the recently registered Zimbabwe People First party.
MDC-T national spokesperson Obert Gutu said such low moves are done by politically immature people.
He pinned the blame on ZANU PF and the Central Intelligence Operatives for being behind the throwing of People First fliers prior to Tsvangirai’s rally.
“It is clearly the work of ZANU PF and the CIO. They want to detract us from mobilising the people because they are afraid of Tsvangirai.
“That kind of a low blow will not make us lose sleep at all because our party is the one that is going to dislodge ZANU PF and deliver real change to the people of Zimbabwe,” said Gutu.
He said they have entered into a full swing mobilisation with Tsvangirai meeting the people in all provinces and all the structures.
“Any form of sabotage will not work because we are a determined party. To us it’s business as usual and the president is touring the provinces meeting the people. It is time to prepare for 2018,” Gutu added.
People First national spokesperson Rugare Gumbo could not be reached for a comment.

He who said it can not be done must not disturb the one doing it!
Share
Facebook
Twitter
Pinterest
WhatsApp
Previous articleGutu magistrate gets tough over violence
Next articleZPS officer, Tongaat manager perish in a car crash