Mnangagwa is a nonentity in politics : Tsvangirai 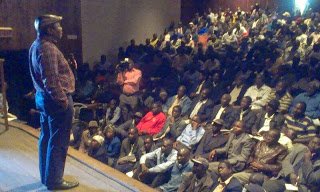 By Itai Muzondo/ Upenyu Chaota
MASVINGO – Movement for Democratic Change (MDC-T), Morgan Tsvangirai described Vice – President Emerson Mnangagwa as a political nonentity who would not win any election against him under normal circumstances.
Addressing thousands of party supporters at a rally at Mucheke Stadium B grounds on Saturday, Tsvangirai posed sarcastic questions to the crowd.

File pic… Tsvangirai addressing supporters at Masvingo Civic Center in 2013
“Who is Mnangagwa by the way? What is it? (Chii ichocho?). If I defeated (President Robert) Mugabe several times, will that Mnangagwa stand a chance? He is just a nonentity,” asked Tsvangirai.
Tsvangirai went on to launch the ‘no reforms no election’ campaign as MDC-T mulled pulling out of parliament if Mugabe’s misrule continues.
“We can recall our MPs from Parliament; we are still assessing the situation. We have already given them the 14 seats we are not going to contest on June 10 because we demand electoral reforms first. If Zanu PF is only concerned about power and not the people, we will give them the power but what I know is that people will soon revolt against the government.
“We will not participate in any election if there are no electoral reforms. We say no reforms, no election. We are doing so because we need to escalate the crisis in the country and if we do not act that way, there will be no resolution to the problems Zimbabwe is currently facing. These problems need no prayers nor tears but real revolutionaries to combat the challenges,” Tsvangirai said.
MDC-T Secretary General Douglas Mwonzora also assured party supporters that they would fight for a total new voter’s role before the 2018 elections.local
Share
Facebook
Twitter
Pinterest
WhatsApp
Previous articleChaos ahead of MDC-T rally
Next articleChinamasa begs Western donors to rescue broke govt