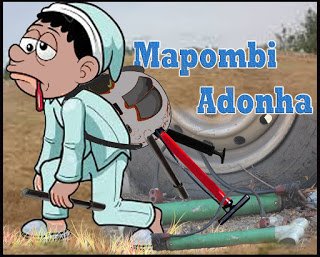 Of the Clueless ED and orchestra Zanu PF!

Ge ge ge ge Why not? Seka zvako Mapombi Adonha uchidya zvako maputi ako unyerere. These guys continue to tell you that they need more time to address the problems bedevilling Mother Zimbabwe and we remain hopeful. With the current black market rates, most civil servants are now earning less that USD 100 take hope. Life has deteriorated to alarming levels guys. You are paid in Zim Kwacha kkkk I mean iwoka RTGS enyu amakada awa but I bet you, more than half of goods and services that you want to buy can be purchased using USD and we continue to pretend that all is well in Zimbabwe. Muchingotonga, mugotonga while some of us tichingochema, tichiyuwira tichichingofira yatisingazivi here nhai Nehanda Nyakasikana? I am sure it was going to be the rightful time for the late VP Muzenda to give us another poem. Where are our poets of today? Nhai mukoma Mauchi muripiko? We are having the worst and most clueless government in action  but unfortunately they are arrogant and they don’t accept advice from others.
Takambovaudza kuti don’t deal with the Chinese, they are here to loot ivo nharo zvino nhasi zvirikupi? When we expect them to apologise and openly tell us kuti they have no idea, ED mbune goes on air and says haana basa with individuals, he only cares for the economy. Hey madhala, it starts with individuals mhani! How do you quickly forget your ‘the voice of the people is the voice of God’. Let me tell you mukuruwe, the people are angry at you and your government, saka chitaurai tione, God is angry kkkk. This is the time I really miss Baba va Bona mhani, Bob time time was better guys, he would go on TV and say all the prices must go down and certainly that was bound to happen. I now see why Bob wanted one center of power, indeed that was good strategy.
In our current set up, we have way too many centers of power, from number 1 himself, number 2 wacho all the way to Queen Bee. Kkkk This Queen is more powerful than the real Queen I am sure. The Queen guy can do whatever he wants in this country, ko kutyei when ED is in State house. Kkkk , I hear ED works even during weekends, hanzi he will be in office even holidays, kkkk seka zvako Mapombi, mukati anenge achiita basa muchinda uyu? I think he goes to office to access computers to play some games or going on internet zvake mudhara. This reminds me of what people are now saying kwedu ku Chitima uku, they have now realised that you don’t become a President ne nyaudzosingwi kkk Pfee Pfee what what nhasi ndoopatasvika apa. People are now queuing for everything, almost everything guys, haa zvanyanya izvi gentlemen. Motorists are always in queues saka vanhu vachashanda riini muma offices umu nhai Nehanda Nyakasikana?
Maybe there are some people who believe that we will see a lot of people being arrested or so, nothing of that sort will ever happen. All you are going to see is a team of commissions for this and commissions for that. No one will be arrested, vakomana vacho vose vakasviba gentlemen, I know. The commissions are there to squander allowances zvavo varimo muma hotels. This is the reason you see a commission investigating what happened in Harare going to Gweru and Bulawayo to ask ordinary people there kuti makambonzwawo here zvakaitika ku Harare. Kkkk boys tinyareiwo kana makudya ma 2 cents edu. This is just a sign of cluelessness. This is the time when your Magayas of this world take advantage of a desperate government and make weird announcements. Nhai Papa, rapai Cholera first yadai kutinetsa iyi. You will soon see some Zanu PF guys buying the story and run with it saying ndoo ZimAsset yacho. I enjoy seeing these guys blundering. Remember the Mavhunga story of diesel paChinhoyi, ndiyo nguva yakadai yamunoona government depending on prophets and N’anga and expect that our economy will grow, I doubt.
By the way, were we informed about those who returned externalised funds? We just saw a list of offenders and we do not know what happened thereafter. Maybe all of them complied, but if so why not giving us feedback yacho? I know these Zanu PF guys are good at drama mhani, they rely on that mad Lumumba to make investigations and key announcements in order to take action. How pathetic. A government with all functional systems, police, intelligence, ministers etc can wait for one of the youthies to make an announcement for them to take action. Haa imi tichareiwo, even Mboko would not do that mhani.
Aaah its almost lunch time nhai, regai zvangu ndinokanga maputi angu ndizvidyire at least handina mota no need to worry. Even if you increase bread price, I survive on rotten bananas, after all Mboko imboko!!