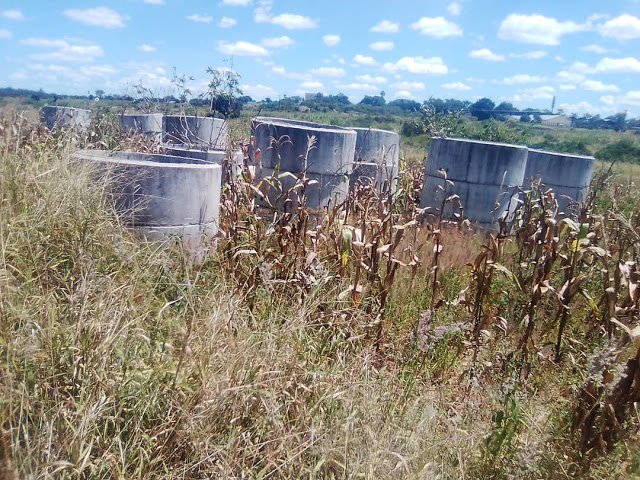 Masvingo city’s Mucheke
Trunk Sewer upgrade remains incomplete and abandoned, nine years after the
project started, and more than US$4 million has been lost in the bungled
project.

A throw-back
investigation by TellZim with support from Information for Development Trust—a
non-profit organisation helping the mainstream media to report on corruption
and bad governance—has revealed that possible graft and mismanagement are
mainly to blame for this.

How
it all began

In 2012, City of
Masvingo advertised a tender to upgrade the Mucheke Trunk Sewer, a pipeline running
roughly parallel to Mucheke River and planned to link with the sewerage plant
in Eastvale.

Covering some 7km, the
new sewer trunk was meant to extend to the fairly new and sprawling Victoria
Ranch suburb just outside Masvingo.

The tender was awarded
to the Harare-based Mutual Construction (Pvt) Ltd, “beating” at least 10 other
bidders, and council fixed a US2.1 million loan from the National Social
Security Authority (NSSA) to fund the project.

Checks have, however,
revealed that Mutual Construction was, by March 03 2021, not among the 108
professional firms listed on the Engineering Council of Zimbabwe (ECZ) website.

Project development
kicked off in 2012 and was supposed to be completed within a year, but the
works stopped in early 2013.

By the end of 2014,
Mutual Construction had removed equipment that remained on the project site,
save for the giant 750-1200mm diameter cement-asbestos pipes purchased from
Turnall Holdings.

In 2015, council put
out a public notice of its intention to borrow a further US$1.7 million to fund
resumption of work on the project.

But barely a quarter of
the job has been done, according to council insiders.

An October 2019 report
by the Auditor General’s Office (OAG) that covered January 2013 to June 2017 that
TellZim dug up places Masvingo among the six sampled urban local authorities—also
comprising Harare, Bulawayo, Mutare, Chitungwiza and Marondera—that faced
severe challenges in the repair, completion and maintenance of sewerage
systems.

Masvingo, according to
the report, reported an average of 2812 sewer blockages per year and was, like
the other five, blamed for “lack of supervision” and “lack of enforcement of
contract agreements” by its engineers and staff.

Down
the sewer drain

Failure to complete the
project as initially planned means that the US$2.1 million loan that Masvingo
City borrowed from NSSA went down the sewer drain.

The local authority has
had to pay an extra US1.4 million in loan interest, bringing the total loan-based
loss to US$3.5 million.

The grand total is
actually higher, considering that, according to the OAG report, there was a
mysterious US$900,000 that was also used on the project outside the NSSA loan
that no-one else is talking about.

The social security
authority was also left smarting because the failure to complete the sewerage
works robbed it of the chance to have its own housing scheme connected to the
sewer mains.

“NSSA provided a loan of US$2.1 million to capacitate the
City of Masvingo to finance the development of offsite infrastructure at
Mucheke in Masvingo and effectively facilitating the servicing of 683 housing
stands owned by NSSA at Runyararo housing development.

“The loan agreement was…for five years at 10 percent per
annum, maturing on 31 December 2018. This loan was fully paid and the city no
longer owes NSSA any money,” said Mutseyekwa in emailed responses to TellZim.

Investigations showed
that, following a council resolution, the pre-project consultancy was awarded
to CNM-YBJ Consulting Engineers, which the insiders described as “dodgy and
obscure”.

The sources claimed that CNM-YBJ Consulting
Engineers had no proven track record nor the adequate engineering staff
complement to carry out a competent feasibility and cost job.

“What came out was a
shoddy report which was then used to source for funding from the National
Social Security Authority (NSSA) and the project was doomed from the beginning
because the money was not going be enough,” said a source.

The source said the
tender was manipulated to ensure that the winning bidders won on the basis of
offering the lowest price quotations as has become the norm in Zimbabwe’s
procurement protocols.

The advertisement for
sewerage development that TellZim has in its possession, though, clearly noted
that council would not be obliged to offer a tender on the basis of the lowest
bid.

The CNM-YBJ was also not
among the 108 professional engineering firms listed on the ECZ website as
updated on March 03, 2021.

However, the company
was listed by the Zimbabwe Association of Consulting Engineers (Zace) as a
member firm.

Former town clerk,
Adolf Gusha, refused to comment on the sewerage bust-up, insisting that he it
would not be proper for him to do so since he had retired.

Gusha retired from
Masvingo City Council in August 2018 after serving in the municipality for
close to 30 years, 14 of them as town clerk.

Selina Maridza, a
former deputy mayor, told TellZim that she was among a significant number of
councillors that opposed contracting Mutual Construction.

“We felt that Mutual
Construction had submitted a deliberate underbid just to out-compete everybody
else. Many of us felt that Forit was better placed to deliver, given its track
record,” said Maridza.

She is currently the Masvingo
Urban Ward 1 councillor, the only member of the 2008-2013 council who is still
serving.

Forit Contracting (Pvt)
Ltd is among the 108 companies listed on the ECZ website, alongside such other prominent
civil engineering firms as Masimba Construction, Bitumen World and Drawcard.

Maridza said council was
often overridden by a powerful clique of senior managers.

Further, she said, the
procurement committee was effectively abandoned in 2008 and there was none when
the sewer project was conceived, leaving management to make the decisions.

David Chingombe, who
served as Ward 6 councillor during the project commencement period and was part
of the tender adjudication committee by virtue of being the chairperson of
council’s finance and general purposes committee, claimed that senior officials
manipulated tender procedures to benefit Mutual Construction.

“The winner won not on
the strength of his CV but on the whim of the town clerk, the mayor and the
city engineer,” he said.

The city engineer then,
Tawanda Gozo, is serving a six-month long suspension for alleged incompetence.

Councillors raised
several objections and even wrote a red-flag letter to the then Local Government
minister, Ignatius Chombo, who never responded, said Chingombe.

“As the adjudication committee, we discovered
that Mutual Construction was incapable of delivering on the project,” he added.

Former mayor, Hubert Fidze who served between
2013 and 2018, rapped the pre-project consultant for a shoddy job.

“There was nothing much that was happening when we took
over. Management told us that the project cost was underestimated and that the
cost of removing solid rocks that were met during trenching was not factored in
the feasibility report,” he said.

“We
stopped work because council did not have money to have the project completed.
The project just moved by fits and starts until we finally pulled out altogether,”
said Madamombe.

He dismissed the claim
that his company received more than US$2 million at the onset.

“Council struggled to
make the payments and to provide other forms of support. If we had received
that amount of money, I am confident a lot could have been done,” Madamombe said.

Mutual Construction
still has a valid contract with council and is ready to resume work once
resources are availed, he added.

“The awarding of the (pre-)
project consultancy tender was problematic and indeed, some councillors are
understood to have raised some complaints with the then minister (Chombo).

“It, however, still
comes back to the councillors as some of them were part of the procurement committee
which had the final say on who won the tender. …The consultant soon proved to
be not competent enough for the job,” said Mukaratirwa.

He admitted that some
rival bidders had angrily protested the decision to award CNM-YBJ the
pre-project consultancy.

This tallies with the
Auditor General’s 2019 report, which states: “Costing of the project by the
consultant, that is, CNM-YBJ Consulting Engineers, also contributed to the
delay in completion of the project. Most of the excavation and blasting works
were grossly underestimated in the Bill of Quantities.”

Mukaratirwa, then
deputy city engineer, justified hiring CNM-YBJ, claiming that the engineering
department which could have done the job was understaffed.

Current mayor, Collen Maboke
said it was difficult to tell who was to blame but partly blamed CNM-YBJ.

“We don’t want to deal with consultants again because if they mislead
you, you end up making wrong decisions,” said Maboke.

On
his part, CNM-YBJ director, Caleb Makwiranzou, dismissed the claim that his
company did a shoddy job.

“They
(City of Masvingo) must take responsibility for their failures and not defend
themselves through falsehoods. We did the drawings and handed them over to
council, which then looked for a contractor. We did what we could do and then
left,” he said.

Makwiranzou,
the former Midlands State University council chairperson, said, far from being
ejected, CNM-YBJ actually pulled out “as council was no longer forthcoming with
payments”.

He
denied that his company won the tender through collusion with some city council
officials and deliberate under-bidding.

Makwiranzou
said his company could not have detected underground rocks along the sewerage
route, so should not be blamed for physical hurdles that were discovered later.

Mukaratirwa told
TellZim that $225 million in local currency, which translates to well over
US$2.7 million at the current interbank rate, was needed to complete the
project.

He said council now
banked on its own revenue streams and devolution funds to complete the project,
adding that borrowing was no longer an option.