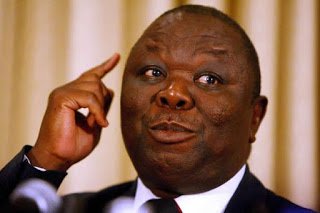 MASVINGO – The main opposition Movement for Democratic Change (MDC-T) leader Morgan Tsvangirai last week called for a collective consensus across the political divide saying the country is in crisis and going solo will not aid plans to push President Robert Mugabe to step down and pave way for a transitional authority.
Addressing thousands of party supporters in Masvingo after staging their fourth provincial demonstration against the worsening economic challenges, Tsvangirai said the country needs a political solution which will pave way for a transition to an electoral system which will create a legitimate government.
“It’s now time we move from our small corners and fight together for a common cause. Pava kuda kuti tiite chirwira Ingwe apa (Let us unite in the fight against Zanu PF like the leopards) We are meeting at a time when we have the darkest period in our history. There is no person in their various lives who has no grievance. The unemployed are crying, the nation is crying for cash but unfortunately we are all meeting at a time when we are all poor people.
“We can no longer tolerate this life. Zimbabwe got its independence for the people to have a better life. The country is in a crisis and it’s a waste of time to fight lone battles, it’s time for a collective consensus across the political divide,” said Tsvangirai.
Tsvangirai said war veterans, workers, employers, vendors and all the Zimbabweans need to work together to create a democratic country.
He slammed Zanu PF for abusing the war veterans when they are the ones who freed the country from the colonial bondage.
“How can you celebrate heroes day when you are actually busy abusing the heroes, it’s a shame. The end is near. Zanu PF is no longer holding, the centre is no longer holding and the end is nigh.
“War veterans, vendors, army, police and the rest of the country are saying Mugabe must go. We want a country where every person is proud to be a Zimbabwean. I want to implore all the members of the army, police and the business community to unite and create a better Zimbabwe where there is an equal opportunity for all.
“We want a peaceful transition. We do not want war. We do not want blood on the floor. We do not want to go around chasing each,” said Tsvangirai.
He said they will not accept disputed elections in the future because it is what has led to the crisis bedevilling the country.
“We want electoral reforms. We want the Zimbabwe Electoral Commission (ZEC) to emulate what is happening in countries like South Africa so that winners are congratulated and losers will accept defeat.
“That kind of an electoral system is still a mirage for us. We still hope for a better electoral system. We cannot get into an election where there is no provision for a level playing field. The rigging of elections has brought us a lot of problems. No one will put money in this country.
“Even the International Monetary Fund (IMF) refused to give us money because of Mugabe,” Tsvangirai said.
The former Prime Minister send a strong message to Mugabe telling him to start thinking about his legacy and contemplate a dignified exit.
“We want to respect you (Mugabe) and that means you have to accept a way of a dignified exit. If you are the founder of Zimbabwe, we want to always make a reference saying you are the one who liberated us not the one who oppressed us”, said Tsvangirai.
He promised to pile more pressure on Mugabe until he steps down.
Zimbabwe People First (ZimPF) members and other pressure groups joined in solidarity of the march which was also fronted by MDC-T second-in-command Thokozani Khupe and the newly appointed deputies; Nelson Chamisa and Elias Mudzuri among other party bigwigs.news

He who said it can not be done must not disturb the one doing it!
Share
Facebook
Twitter
Pinterest
WhatsApp
Previous articleNo land for Zanu PF youths – mayor Fidze
Next articleZim PF demotes Makova