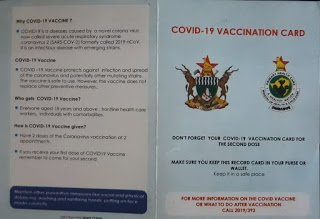 There has been rising concern over the vaccination program’s lack of foolproof ways to avoid double vaccination with calls being made to computerize the process, TellZim News has learnt.

Talking to TellZim News, Masvingo Provincial Medical Director Amedeous Shamhu said that it cannot be ruled out that a person can get two Sinovac jabs after getting two Sinopharm ones since the process is not computerized, even though it would be very far-fetched.

“We cannot really say that it is not possible for a person to receive two doses from two different vaccines since our system is not computerized.

“We would however really wonder why a person would get vaccinated from two different vaccines because a normal person would not do such a thing. Actually we will consider it total madness,” said Shamhu.

The concern may have emanated from the depletion of first doses of vaccines in many health centers at a time when people were warming up to the idea of getting vaccinated.

Masvingo Provincial Taskforce spokesperson Roders Irimayi told TellZim News that people were being educated on the vaccination process, and it would be very unfortunate to find people who are getting double vaccination.

“We are on the ground educating people on the vaccination process, and it would be unfortunate to have people who take advantage of the system and get double vaccination, which will deprive others.

“No one knows what will happen if a person gets two different vaccines and I do not think anyone would do that to themselves, because when one gets vaccinated they are given a vaccination card,” Irimayi said.

The country is expected to receive 25 000 Sputnik V doses from Russia and 500 000 Sinopharm doses from China which are expected this Saturday.

As at June 24 a total number of 724 582 people have been vaccinated against Covid-19 in Zimbabwe.