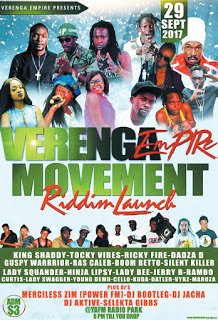 – Significant developments are happening in the musical art industry of the mining town after the entry of the Verenga Empire Entertainment in May 2017.
The recording company is the brainchild of Farai Verenga who said it is his goal to help develop the local art industry by offering quality and affordable recording services.
“This studio is not the end because we have plans for others all over the country and even beyond,” said Verenga, a former producer at recording companies Gramma Records, Harare-Zimbabwe, Storms Records-Botswana, Albaab Entertainment (United Arab Emirates).
“The Verenga Empire Entertainment is professional record label which operates on a professional basis guided by business integrity and other core values. We are a unique record label with diversified interests that go beyond music,” said Verenga.
The company has other interests like the Verenga Empire clothing line, Link Africa TV and ALIVE (All Live in Victory Eternally) with candidates still under audition.
Verenga said the company supplies quality audio visual entertainment to a diverse consumer base and has distinguished itself through the commitment it has to all artists signed to the stable.
This is in accordance with the company’s mission to help its clients achieve their dreams in the shortest possible time.
“A company without a vision is dead so our vision is to help upcoming musicians to become stars. Artists around Zvishavane are invited to come and record with the Verenga Empire Entertainment,” said Verenga.
The company participates at such events as Open Mic at YA FM Radio Park to search for talent and a number of young people with talent have already been identified.
Eleven artists have already been signed and are recording while a seven-track compilation album done by such artists as King Shaddy, Mathius Mhere, Pah Chihera, Lady Swagga, Curtis, Sims Brownd and TNyc has already been produced.
The company is also preparing for its Movement Riddim Launch, an event where established artists like King Shaddy, Silent Killer, Ninja Lipsy and Lady Squanda will share the stage with local artists like Lady Swagga, Vybes, I Watta and Demo on September 29.entertainment
Share
Facebook
Twitter
Pinterest
WhatsApp
Previous articleEmerging Zvishavane artist dreams big
Next articlePrison Ministries founder pleads with churches to help ex-convicts