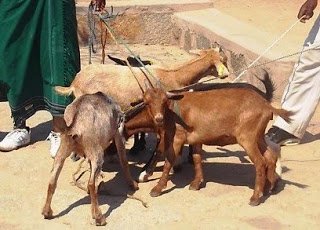 Days of using bush toilets for villagers in Gutu and Zaka are numbered as some traditional leaders in most parts of the two districts are now demanding a goat from any person caught red handed defecating in the open.
The move which has seen a sharp increase in the construction of blair toilets in areas such as Mataruse and Chiwara areas of Gutu as well as Chipinda in Zaka has been met with mixed feelings with some people praising traditional leadership for the initiative while others condemn the village heads for abuse of power.
Both Sabhuku Chiwara and Chikapwa of Gutu and Zaka respectively, said they did not see anything bad about the initiative. The village heads said they were only implementing what villagers agreed.
” It’s not our idea… villagers who want to promote hygiene in this area approached us and requested us to implement their resolution – we are just implementing. I am proud of my people because they have taken a position in promoting their own sanitation and hygiene,” said Sabhuku Chiwara.

However, Chiwara could not disclose number of offenders fined so far.
A villager from Gutu Mateyo Simango said the initiative helped villagers to see the need for constructing blair toilets.
” I am happy that offenders are heavily fined… thus the only way we can promote hygiene in our area,” said Simango.
A health expect Marasa Hamudi Gutukunuhwa praised the villagers saying before the initiative four (4) out of 22 had toilets at their homesteads but recent survey indicates that more than 70 percent of people had constructed toilets.Local
Share
Facebook
Twitter
Pinterest
WhatsApp
Previous articleBleak Xmas for council workers
Next articleFarmers plant untreated seeds