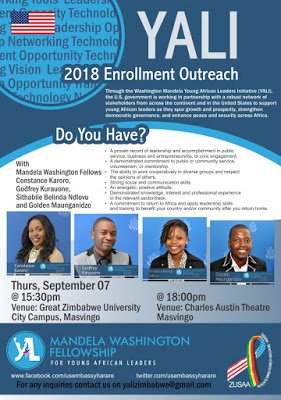 MASVINGO – The 2018 Young African Leadership Initiative (YALI), which is one of the pillars of the Mandela Washington Fellowship, has begun a series of country-wide symposiums aimed at exposing the programme to more talented young Zimbabweans.
One such meeting was held in Masvingo last Thursday where it was heard that the application period will close on October 11, 2017.
Among other people, the meeting was attended by three fellows Sithabiso Ndlovu, who did a civic leadership course at Delaware University in 2016; Golden Maunganidze, Staley School of Leadership Studies, Kansas in 2016 and Godfrey Kurauone who attended the Presidential Precinct at the University of Virginia this year.
Speaking at the meeting, Michael Mabwe, who works with alumni of American exchange programmes at the United States Embassy in Harare, encouraged attendants to apply, saying the programme did not seek well-accomplished individuals, but was meant for young people who are making a difference in their communities and areas of interest.
“It is those people with leadership potential who matter; those young people who are making even a little difference in the lives of others in communities,” said Mabwe.
He revealed that such post-fellowship opportunities as grants that can be applied for, mentorship opportunities and internships in Zimbabwe or elsewhere in Africa were be available.
The fellowship is open for those between the ages of 25 and 35 though there is also room for exceptional applicants who are below the age of 25.
Successful applicants will be send for a six-week academic and leadership institute at a US university or college in any one of the three tracks namely business and entrepreneurship, civic leadership and public management.business,topnews
Share
Facebook
Twitter
Pinterest
WhatsApp
Previous articleMucheke Pirates slaughter Gutu Leopards
Next articleShariwa attacked by fan over poor results