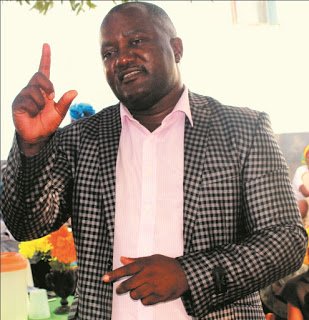 – Candidates for the oncoming Zanu PF chairmanship elections in Masvingo have expressed diverse attitudes to the exercise, with former chairperson Ezra Chadzamira exuding confidence while his likely rival Rtd Colonel Mutero Masanganise has remained largely indifferent.
The election re-run, which is set for May 6, is expected to finally bring closure to the problematic chairmanship position which has seen countless sackings and counter-sackings over the past two years.
Speaking to TellZim News, Chadzamira said he had put everything in place to make sure he wins the election.
“I am a politician and I am always ready for elections. Pertaining this week’s election, I have always been ready and raring to go. It is everyone’s wish to win though it is the cast vote which determines one’s victory so as of now, I can confirm that all I am waiting for is election day. I have worked so much for to make sure I win,” said Chadzamira, who is widely tipped to win the election.
His possible competitor, Masanganise however was more reserved in his response to calls for a comment, choosing to say people should wait and see how events will unfold.
“Why do you rush to know what I am doing? Isn’t the day coming? If you agree with me that the day is coming, wait and see what will happen on the day and write about that,” Masanganise said before hanging up the phone.
Insiders within Zanu PF, however, told TellZim News that Masanganise was no longer interested in taking part regardless of Joramu Gumbo’s warning that no one will be allowed to pull out of the race.
At a Provincial Coordinating Committee (PCC) meeting recently, Gumbo also made it clear that no new candidate would be registered to contest in the election.
“To tell us that you will be pulling out of the election won’t be welcome at this point. Your concerns have been sent forward to the highest offices so that a resolution can be brought forward and after all these meeting which the President even set for, who will you be to say you are pulling out of the election? No new candidates will contest either,” Gumbo said.
Gumbo, who is the current interim chair for Masvingo, also promised party members that once a substantive chair is voted in, the party will then work to put structures back into shape.
“I know you have many other worries but as soon as we pass this phase, many other pressing issues will be dealt with,” said Gumbo.
Masvingo has had no substantive chairperson since the then provincial leader Calisto Gwanetsa was sacked in 2014 on allegations of working with the ousted Mujuru faction.
Gwanetsa was replaced by Paradzai Chakona who was also sacked for allegedly abusing party resources.
It was Chadzamira who replaced Chakona before a vote of no confidence was passed against him and was replaced by Amasa Nenjana but as factional flames raged further, Nenjana was also sacked and was again briefly replaced by Chadzamira.
This was before the politburo intervened and called for an election to choose a non-disputed chair, appointing Jorum Gumbo to oversee the new election.
The election was held and provisional results saw Chadzamira taking an unassailable lead against Masanganise but the results were nullified after many districts were said to have failed to vote due to logistical nightmares caused by floods.
Meanwhile, Minister of State for Masvingo Provincial Affairs, Shuvai Mahofa pulled a shocker after chanting a pro-Chadzamira slogan while giving closing remarks the PCC meeting.
“Pamberi, neZanu PF, musi wa6 Chadzamira muoffice,” said Mahofa said before explaining herself to a seemingly concurring audience.
“Yes, I said Chadzamira muoffice, kwaari ndiko kune ruzhinji. KuZanu PF ukangoona woenda kune vashoma wotoziva kuti warasika ndosaka ndataura kuti Chadzamira muoffice.”politics,topnews
Share
Facebook
Twitter
Pinterest
WhatsApp
Previous articleFurniture with a feminine ambience, the Shanna way
Next articleMDC-T bans social media