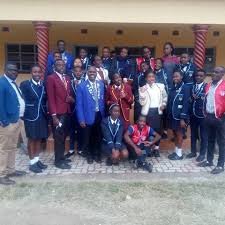 …as Mutendi High leads in Maths
The 2019 Zimsec ‘A’ level results
are out, and a lot was not yet clear by the time of going to print but one
thing that has emerged is the fact that Pamushana and Gutu High schools had one
pupil each with 30 points.
Pamushana boats a 97.86 percent
pass rate with 77 pupils scoring 15 points and above.
Ndarama High School recorded two pupils
with 20 points, two with 19 and three with 18 points. Two pupils had 16, 12
pupils with 15, 15 with 14 points and 16 with 13 points.
Tugwane High in Masvingo Rural district
has three pupils with 15 points while Nyabata had its highest pupil had 24
points; one with 20 and another with 19. The school recorded a number of pupils
with 15 points.
Reformed Church in Zimbabwe
(RCZ)-run Zimuto High has 22 pupils with 15 and above and the highest has 20
points.
Another RCZ school Alheit Chingombe
II High of Gutu district has three pupils with 15 points, three with 14 points,
two with 13 points and five with 12 points with a 100 percent pass rate.
Alheit recorded an improvement in
Pure Maths at 84 percent and has 13 pupils with As in Business Enterprise.
Zaka district has 15 pupils with
15points, with St Anthony’s Musiso High School recorded a hundred percent pass
rate with one pupil scoring 20 points.
Six of its pupils obtained 15
points while 16 obtained 14 points.
Zivavose High, again in Zaka
district, has one pupil with 15 points and five with 14 points while Magura High
has one pupil with 15 points.
Mutimwi and Rudhanda has one
pupil each with 15 points while Chinorumba has three with 15 points.
While the actual numbers were not
yet available by the time of going to print, sources said the Zion Christian
Church (ZCC)-run Mutendi High School is one of the leading schools in
Mathematics, if the current ‘A’ level results are anything to go by.
Results for other best performing
schools like Zimuto High, Gokomere High and Serima High were not yet available
by the time of going to print.
Share
Facebook
Twitter
Pinterest
WhatsApp
Previous articleSoldiers shoot dead two in Masvingo
Next articleAnother judge for Masvingo High Court