Boxing board to open office in Masvingo 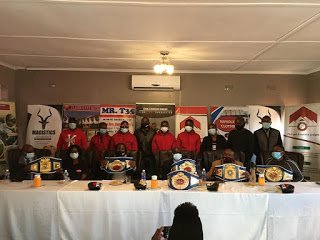 …as Manyuchi retraces his roots

The Zimbabwe National Boxing and Wrestling Control Board (ZNBWCB) will next month open the Masvingo office as it seeks to spread its wings across the country’s 10 provinces and set its base.

This was revealed by the ZNBWCB secretary general Lawrence Zimbudzana during a presser at Flamboyant Hotel, where he told journalists that the board will open the Masvingo office in July.

“The ZNBWCB board will be opening its provincial coordinating office in Masvingo from July 1, 2021. This development is in tandem with the country’s devolution agenda and also government’s commitment to ensuring equitable development of all the communities through sport and recreation,” said Zimbudzana.

World boxing champion, Charles Manyuchi will defend his title two days later in what has been dubbed ‘Duel of the Doom’ Boxing Tourney.

Zimbudzana said the tourney will be a platform for budding local boxers to showcase their talent and build their profiles.

“As the ZNBWCB, we are excited that the champion Charles Manyuchi has chosen to defend his title in a unifying match here in his home town Masvingo. The hosting of this event here therefore is an opportunity for local residents to experience world class boxing in their backyard.

“THE Duel of Doom Boxing Tourney is yet another platform for boxers to showcase their talent and also build their profiles. As sport is slowly emerging out of the effects of the Covid-19 induced lay off and most boxers are being afforded here is a welcome development in boxing fraternity,” said Zimbudzana.

The July 3 fight which will be hosted at Flamboyant Hotel will be limited to 250 guests and will be held under strict Covid-19 regulations.

Manyuchi who has been on a sabbatical will seek to defend three titles in one night and is reportedly ready for the duel.