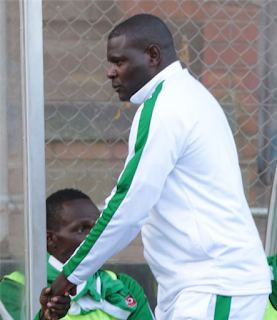 ZVISHAVANE – Caps United gaffer Lloyd ‘Lodza’ Chitembwe’s days at the helm of the Green Machine may be numbered as he hinted on the possibility of leaving the club despite the club being on third position on the Castle Lager Premier Soccer League (PSL) log standings.
Though Chitembwe could ne

ither deny nor confirm that he might leave Caps United, his body language seemed to suggest that he was not happy at the club. He however was quick to mention that he will leave the club a happy man if he is to make such a decision.
“You get to a point when you realise that your good is not good enough and sometimes it will be best to try something new. I am still thinking about my future at the club but I might be on my way out soon,” said Chitembwe.
“I am happy with improvements at the club; the team is playing far much better than how it played last season. I don’t know when I will be leaving the club, but if I’m to leave the Green machine; certainly I will be a happy man considering how I transformed the club this season. The club is among title contenders and we are just a point behind log leaders,” said Chitembwe.
Caps United lost their last match by a goal to nil to Highlanders at Barbourfields and Chitembwe feels that the club needs to do more if they are to remain among the league title favourites.
Cap United director Farai Jere said the club was happy with Chitembwe and insisted that they have no intention to part ways with the gaffer. Jere urged all Caps United fans to rally behind Chitembwe.
“We are happy with the team’s performance and we have no intention to part ways with Chitembwe. I want to urge fans to respect and rally behind Chitembwe because he has immensely improved our performance since he took over last season,” said Jere.sport

He who said it can not be done must not disturb the one doing it!
Share
Facebook
Twitter
Pinterest
WhatsApp
Previous articleWho says Tsvangirai moves with open zip and shut mind?
Next articleMahofa exposed again