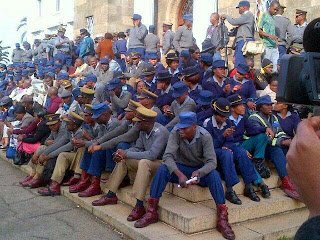 Tell Reporter in Zaka
There was drama at Jerera police station this week when members of the public who felt provoked by police details on duty had a fierce fight with one officer until they disarmed him before bringing business at the camp to a grinding halt.
Narrating how it happened to Tell Zimbabwe, eye witnesses said it all started as  drama in a bar at Jerera Growth Point where a police officer identified as Constable Mandava was harassing patrons. Irked by his bahaviour, members of the public decided to fight back.
The officer was chased all the way from the Growth Point to the police base where he tried to use a gun to intimidate members of the public but the civilians did not retreat.
“They continued to fight until they disarmed him. Business at the camp was brought to halt as the public were baying for the constable’s blood,” said an eye witness.

Tell Zimbabwe was informed that some people who were injured during the skirmishes were rushed to Msiso hospital.
However, the injured could not get immediate attention due to logistical problems at the hospital.
“There was no medication ….not even bandages at Msiso,” said one of the sources in Zaka.
Meanwhile, two police officers from Zaka were dragged to a disciplinary hearing in Bikita this week after they were fingered in a case where St Peters private hospital owner Cephas Gwamure was threatened with death by ‘unknown’ assailants. One of the senior district officers from Criminal Investigation Department (CID) is also expected to testify in the same case in Bikita on Monday.Local
Share
Facebook
Twitter
Pinterest
WhatsApp
Previous articleSchools dismiss students over fees
Next articleSchools quarantine students over non-payment of fees