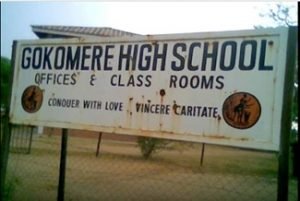 At least 40 pupils from Gokomere High School are currently (November 08, 2021) detained at Masvingo Central Police Station for allegedly attacking two police officers who had gone to question them for an alleged theft of food items in the school Dining Hall.

Sources privy to the incident said some food stuffs went missing in the Dining Hall and authorities at the school believed the suspects to be school pupils.

Two police officers were called to investigate but they were attacked by the pupils.

It is further alleged that more police officers were called in to quell the riot.

They are further alleged to have stoned the DH window panes as well as the school head Acquanos Mazhunga’s vehicle.

The school head and other top members of the responsible authority of the Mission Schools including the Priest in Charge James Magadzire are currently on bail pending trial over massive gross mismanagement of school resources. Parents have been up in arms with the school authority over the mismanagement resulting in auditors being called and they found a number of anomalies.

The school reportedly ran without School Development Committee (SDC) for three years since 2018 subsequently leading to the Zimbabwe Anti-Corruption Commission (ZACC) dragging the school leadership to court and they have since been granted bail while awaiting judgment.