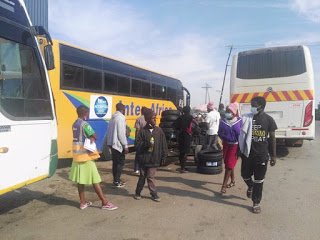 Nearly two weeks after Masvingo City Council resolved to revive Mucheke Rank and immediately move all buses operating from undesignated points, nothing has materialized so far.

Masvingo City Full Council resolved that all buses should use Mucheke Bus Terminus starting from June 1 but there has not been any enforcement yet, with buses still loading in the CBD.

Speaking to TellZim News, Masvingo Mayor Cllr Collen Maboke said there were issues to be resolved between municipal police and Zimbabwe Republic Police (ZRP) so they can work together to enforce the resolution.

“We did not fail to implement the resolution to move buses from the CBD to Mucheke rank but there are issues to be resolved between municipal police and ZRP and l assure you that it will be done by end of this week,” said Maboke.

Masvingo Service Delivery Residents and Ratepayers Association (Masdrra) secretary general Moses Mavhusa said he thought that the resolution to move buses to Mucheke rank, if enforced, would benefit residents through revenue income because there will be accountability but it was now taking too long.

“We welcomed the resolution that all buses move to Mucheke rank seeing that it would benefit us through revenue collection since there is accountability at the terminus, but right now we wonder if there are people benefiting from the disorder since the resolution is not being implemented.

“If resolutions are agreed upon they should be followed but we are yet to get any information from the council. Council is taking too long to implement that resolution because there is no change,” said Mavhusa.

“The resolution to move buses to Mucheke rank was a noble idea since council was going to generate income which they could use in other service delivery projects like water augmentation, but they seem to have abandoned such income generating projects.

“They only rely on rates paid by residents and this is why they were hiking rates lately, but they are not implementing resolutions that can actually help them. It’s only on paper, yet we want them to walk and talk by enforcing their resolutions,” said Mtimba.

Masvingo Residents Forum (MRF) Chairperson Brighton Ramusi said the resolution was a failure and shows that councilors in Masvingo are no longer representing the interests of the electorate who voted for them since they did not consult the residents.

“The resolution was a failure from the onset since council did not involve the residents. It is going to be difficult for people travelling from Gutu and Zaka who will have to look for another mode of transport from Mucheke to the CBD.

“Council should rather forget and stop their plans to construct a terminus at Exor as they indicated, but should establish termini in the outskirts of the CBD. They can upgrade and modernize these temporary terminuses so that residents are not affected,” said Ramusi.