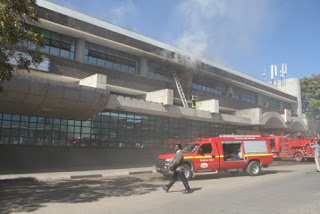 A United Kingdom (UK) based charity group, Operation Florian has donated a Fire Tender to City of Masvingo, a move which will see the local authority increase its fleet to three.

The city fathers who had an option to choose between a DAF and Volvo fire tender opted for the DAF Fire Tender.

A report by Acting Director of Engineering Services, Kudzaishe Mbetu revealed that Council will meet a total of 10 500 British Pounds in shipping and transportation costs from the UK up until the Fire Tender reaches Masvingo.

Masvingo’s two Fire Tenders are currently grounded and are being repaired in Harare and Masvingo respectively according to a report from the responsible department.

“The current fire trucks in Masvingo are malfunctioning, the Volvo AAE 8001 is not operational and was undergoing transmission repairs at Auto World in Harare. The Hino AAE 5723 was reported not operational after a wrong clutch master was supplied,” further reads the report.

The donation is expected to help improve efficiency and effectiveness of the city’s fire section.

Council has been blamed on numerous occasions for not being efficient in their response to emergency situations which need the Fire Section.

Operation Florian is a charity set up by British firefighters to save lives overseas by donating reconditioned fire engines and emergency equipment to help improve emergence services.