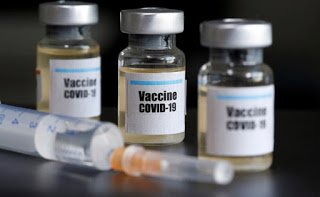 … ‘we risk being used
as guinea pigs’

… ‘we should use your
our own zumbani’

Former Chiredzi General
Hospital District Medical Officer (DMO), Doctor Tungamirai Rukatya has said
there is no reason to take the Covid-19 vaccines as the benefits of taking them
are outweighed by the attendant risks, TellZim News can report.

Zimbabwe received the
first consignment of 200 000 SinoPharm Vaccine from the People’s Republic of
China on January 15, 2021.

The vaccine doses came
as a donation and the country is also expecting another batch of the same type
of vaccines which it has procured.

While making a review
of the Zimbabwe National lockdown last Monday, President Emmerson Mnangagwa
said they expected more vaccines from Russia, India and the United Kingdom
(AstraZeneca and Pfizer/BioNTech vaccines).

AstraZeneca’s vaccine
was condemned by South African scientists after trials showed that it was not
effective  against a new Covid-19 variant
which now accounts for over 90 percent of new infections in that country.

In an interview, Dr
Rukatya said there was no ample time to scientifically prove the efficacy and
side effects of all the Covid-19 vaccines available.

“It takes at least
5 to 10 years, scientifically, to conclusively say a vaccine works. In Zimbabwe,
coronavirus has been there for some time and the mortality rate has largely
been below 5 percent, meaning that there is no justified reason to risk taking
the vaccine,” said Doctor Rukatya.

Rukatya also said it
was more prudent for Zimbabweans to fight other growing problems like malaria,
poor governance and poverty and also use local remedies like zumbani in
fighting against the virus.

“The benefit of
taking the risk is outweighed by negative effects of the vaccine. This is not
the case in Europe and America where the mortality rate was way above 15
percent which makes their case much different from ours.

“We have climate on our
side. Let’s focus on our problems namely malaria, poor governance and poverty. So
let’s use zumbani for now and prevent being guinea pigs for no benefit,”
said Rukatya.

SinoPharm Covid-19
vaccine is a type of inactivated (verocell) vaccine to protect individuals
against infection from SARS CoV 2 (the virus which causes Covid-19 Disease). It
is given as a dose regimen, 2 to 4 weeks apart, through injections in a muscle
(typically upper arm).

The jab is recommended
for adults aged 18-60 years including those with chronic illnesses that are
well controlled and is not recommended to those below 18 years of age.

The vaccine is not
advisable to women who are presently pregnant or breastfeeding or planning a
pregnancy within the next six weeks and to anyone with a history of serious
allergy (anaphylaxis) requiring emergency care.

The jab is also said be
not good for people with conditions that suppresses their immune systems for
example those that are HIV positive, persons on steroid medications or
receiving chemotherapy as well as people with uncontrolled epilepsy or other
neurologic conditions.

It is also not
recommended for people with uncontrolled chronic conditions for example
uncontrolled diabetes or hypertension, uncontrolled heart failure, late-stage
kidney disease and uncontrolled asthma.

Government says the vaccine will be administered
to those who want them and nobody will be forced to take it.