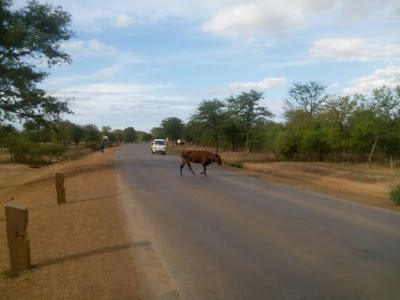 MWENEZI – A three-month-old baby boy miraculously survived a
horrific car accident which tragically claimed the life of his mother right the
spot after the vehicle by which they were traveling hit a cow along the
Masvingo-Beitbridge highway.

The accident occurred on December
01 at Mateke turnoff along the Mwenezi district stretch of the Masvingo-Beitbridge
highway. It claimed the life of Ulita Mpofu but her baby boy was spared, and he
was pulled from the vehicle wreckage with no scratch.

The accident was responded to by
Rutenga traffic police, with some sources saying Omac Guzha, the driver of the
3.5-tonne truck which was traveling towards Rutenga from Beitbridge with seven
passengers on board, was to blame for the tragedy.

Guzha, who survived the accident
with minor injuries, said he rammed into a herd of cattle right in the middle
of the road just after a haulage truck which was coming from the opposite
direction had beamed its headlamps into his face.

“One passenger got seriously
injured with the rest of us escaping with minor injuries. The mother of a
3-month-old boy is the one who died on the spot but the baby survived. My
eyesight had been affected when the driver of the oncoming truck flashed his
headlamps into my face.

“He did not even give me any
danger signal of what was immediately ahead of me.  I did my level best to avoid hitting the
cattle but I still crashed into one of them and the vehicle veered off the road,”
said Guzha.

He denied accusations that he had
acted recklessness on the road and that he was over-speeding when the accident
occurred.

Muchena acknowledged that the
Masvingo-Beitbridge highway, especially the Chivi-Mwenezi stretch, has
experienced some of the worst road traffic accidents caused by both human error
and the presence of livestock on the road.

“Since Zimbabwe is a cattle
country, we urge drivers to exercise extreme caution when driving this festive
season and ever after. Villagers and farmers who live along the highway are
urged to pen their cattle every day and make sure they do not allow them to be
on the road.

“Under the country’s road traffic
regulations, it is an offence for people to let their domestic animals stray
along roads such as the Beitbridge-Masvingo highway,” said Muchena.

Carcasses of domestic animals hit
by vehicles are not an uncommon sight on this road which has over the years
created orphans, widows and widowers.

Many of the accident occur during
the night or in the rain when visibility is low, making it difficult for
speeding drivers to control their vehicles in face of imminent danger, and to minimise
the impact of accidents.

Some farmers who live close to
the highway feel that there is need for greater road traffic law enforcement
along the highway.

“As farmers, we take part of
the blame for the stray animals that cause accidents along the road but we also
feel that law enforcement is not adequate. Those responsible for enforcing the
law seem to be sleeping on duty and we feel more could be done to improve road
safety,” said local farmer Juliet Moyo.

She said culprits almost always
seem to know how to navigate their way out of trouble as police officers were
more than eager to let them go if bribes were paid.