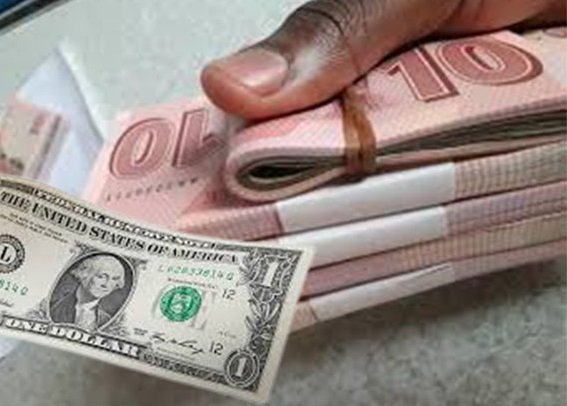 The country’s foreign currency (forex) auctioning system introduced in an attempt to tackle the ever-rising inflation rate that is ravaging the country’s economy has unrealistic exchange rates, experts have said.
Kenneth Mureya an economic analyst said the economy of the country seems to be controlled by parallel (black) market exchange rates other than market forces resulting in abnormal exchanges.
“The reason why black market seem to be controlling the economy of this country is that our auction rate is not realistic. A simple sign showing that the market is not in equilibrium state are long queues for the US $50 that the Reserve bank of Zimbabwe (RBZ) has allowed for an individual to access from banks or bureau de change facilities,” said Mureya.
In Masvingo, this is witnessed by long queues that are usually at Bureau de changes and banks dotted around the city, where the US $50 is said to be usually accessed by black market money changers at the expense of ordinary citizens such as pensioners and civil servants.
Mureya also said the government should abandon the Zimbabwean currency to subdue the financial instability.
“Zimbabwe must for now leave the Zimbabwean dollar and join the Rand union which is not very strong as compared to the American dollar (USD) to at least stabilize the financial sector, though this comes with its drawbacks,” said Mureya.
Another economic analyst Vince Musewe said because of what happened in 2008, Zimbabweans now have lost trust in local currency, banks and have more trust in the USD.
“Zimbabwe receives about US $1 billion per annum on remittances from the diaspora. This money once it leaves the banking sector does not go back, people take their money and go to the streets and change it at a higher rate than they will get at the bank.
“In 2008 people lost a lot of money, there is fear of loss that is ingrained in the brains of Zimbabweans. There is always a distrust of local currency and more trust in US$, people are using US$ not only for transactions but also as a store of value,” said Musewe.
During the period 2007 -08 citizens would sleep at banks or wake up during the wee hours of the morning to get money at banks.
Musewe also said the auction-rate has done its work on arresting the rate of increase on parallel market because companies can go there and buy forex cheaper than they will from the streets but some people still go to the auction platforms and then resale it on the streets.
Also in Masvingo, it is alleged that some top Zanu Pf youth league members are among the impetuous people who are playing part in fueling the forex black market in the country’s oldest city.
As of November 16, 2021, the official government’s exchange rate was at ZW$105 to US$1.
It was also reported recently that RBZ boss Dr John Mangudya blamed social media for the instability of exchange rate.
When Bond notes were introduced in 2016, government said the two currencies US$ and ZW$ were at par.
As at November 5, 2021 shops at Mucheke rank were rating USD 1 to 180 ZW$, with illegal money changers operating outside most of Masvingo’s big supermarkets exchanging USD 1 to ZW$140 and USD 1 was going for 140 Rtgs (mobile money popularly referred to as Ecocash) on November 08.
Masvingo Consumer Council of Zimbabwe (CCZ)Regional Officer Ndumiso Mgutshini told TellZim News that the monthly breadbasket of a normal family in Masvingo is slightly above forty-one thousand (ZW$41 000)
Recently war veterans were arrested in Harare after they demonstrated against their monthly pensions which are currently pegged at ZW$ 16 000.
Prosper Chitambara an economist said the unrealistic nature of the formal forex exchange rate is driving the depreciation of the local currency.
“The auction rate does not fully reflect those market dynamics in terms of rising demand and limited supply of foreign currency. Therefore, what would be seen is the significant depreciation of the Zimbabwean dollar on the black market that contributed to the widening of black-market premium rates.
“I think there is need for further liberalization of the forex auction market with respect to the exchange rate determination so that at least there is a greater involvement of market forces of demand and supply in terms of price discovery or the exchange rate determination on the auction market,” said Chitambara.
Collen Jonasi an economic analyst also said RBZ should increase the quantity of USD in its weekly auctions to avert the shortages.
“I urge RBZ to improve the amount of USD available for allotment at its weekly auctions. They should up their game in mobilising USD because there is still a shortage and as a result firms go to the black market to fill the gap,” said Jonasi.