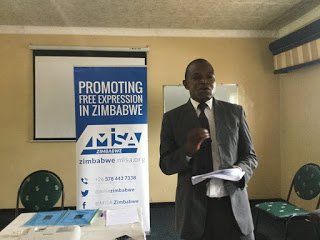 Chief Supt Paul Nyathi speaking at the event
Tiyani Hahlani
MASVINGO- The cat and mouse relationship that existed between journalists and members of the Zimbabwe Republic Police (ZRP) will be a thing of the past as the law enforcement agency has called for cordial relations between the two parties for the promotion of peace ahead of the forthcoming elections.
Speaking at an Election Safety and Security workshop facilitated by MISA-Zimbabwe Flamboyant Hotel last weekend, national assistant police spokesperson Chief Superintendent Paul Nyathi called on the media and the police to work together to ensure that a peaceful environment prevails during the coverage of elections.
Over the years, the police and the media have enjoyed a sour relationship with the former accusing the latter of beating them up in discharge of their duties.
“The relationship between the police and the media is like that of fish and water, we cannot do without each other. We need to work together in the execution of our duties. The police and the media are key stakeholders in as far as the provision of information during the election period is concerned.
“Let us work together to promote peace during the election period,” said Chief Supt Nyathi.
He said the cases of harassment are a thing of the past as the police will work to ensure that journalists are given their space and protection in discharge of their duties.
“As the police, I want to assure you that the field will be friendly for journalists. We have urged all our officers to respect you when doing your job. We will provide you with all the information you need from the provincial offices to national,” said Chief Supt Nyathi.
Of late, journalists have been caught in the cross fire with the police especially when covering protests, something which the police say will be resolved amicably.
“Journalists covering demonstrations or public disorder situations can contact our ground commanders at respective places of occurrences so that they will know who is who. Journalists also need police protection during covering protests or any other disturbances hence we should work together,” said Chief Supt Nyathi.top stories.
Share
Facebook
Twitter
Pinterest
WhatsApp
Previous articleHigh Court settles Tongaat Hullett, ZSMIWU wage dispute
Next articleED’s list of shame