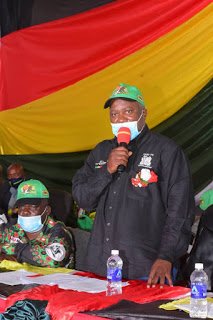 …as
attempts to cancel it faulter

CHIREDZI
– Vice
President Constantino Chiwenga has failed to force through a cancellation of
the Kilimanjaro sugarcane plot beneficiaries list which was drawn by the
Minister of State for Masvingo Provincial Affairs Ezra Chadzamira’s office.

Last month, Vice President Constantino
Chiwenga gave an order that the list be set aside and a new one be drawn following
complaints that the list was not inclusive as it had allegedly brought many
outsiders at the expense of locals.

Speaking during the Zanu PF inter-district
meeting in Chitsanga Hall this week Chadzamira, however, said government had
processes that are followed when making allocation decisions.

He said it was not his decision
alone to determine who gets what piece of land as the Ministry of Lands was a
major stakeholder in the process.

“On
allocation of land, government is not a kiosk which sells cigarettes; it has
policies which are run by structures. Land is given by the Ministry of Land
through set structures not what I hear that MPs are compiling registers of people
to be given land. Where do you get that? Government is run by the constitution,
we need well-arranged things,” said Chadzamira.

“President
Mnangagwa gave us Vision 2030 and he will be there until we achieve it. So all those who are dreaming that it will be achieved
by someone we are sorry for you. Others achieved theirs from 1980 to 2017 and
that vision attracted many opposition members,” said Chadzamira.

Chadzamira
was supported by Chiredzi West Member of Parliament (MP) Farai Musikavanhu who
said the existing list of Kilimanjaro sugarcane beneficiary list was ‘pleasing’
and should stay as it is.