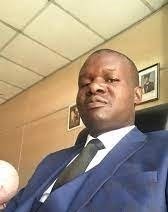 Human rights
lawyer Martin Mureri of the Matutu and Mureri Legal Practitioners was forced to
flee his home on Saturday night after suspicious people driving unregistered
ex- Japanese cars put his house under surveillance at around 1900 hours.

Mureri
told TellZim News that he was living in fear after his house was put under
surveillance by people he suspects to be state security agents.

“It is
true that there were people who were surveying my house on Saturday. They were
driving cars which were unmarked and without number plates.

“The
occupants were taking pictures of my house and I do not know to what end. I did
not sleep at home that night because I feared for my life.

“I was
tipped by my friends that I should be careful and watch my back because the
state security agents were looking for me. I do not know why they are looking
for me,” said Mureri.

He said
if he had done something the wrong, the police should summon him saying he was
not a difficult man to find.

“I am
not a difficult man to find. If I have a case to answer, the police should
summon me. I do not think this is a criminal issue but let us wait and see.

“If
they want me they will eventually show their faces,” said Mureri.

Other
sources said that Mureri was being targeted after it emerged that he hosted MDC
officials who were headed to Chilonga on Saturday.

Mureri
denied hosting the delegation at his house saying he never met with them but
only heard that they passed through Masvingo.

The
Zimbabwe Lawyers for Human Rights (ZLHR) on Saturday issued an alert saying
they were concerned about the safety of Mureri.

“We are
concerned about the situation of our member lawyer Martin Mureri from Masvingo
who is alerting us of suspicious movements and activity at his home.

“Several
vehicles without number plates have been sighted in the vicinity of his home.
Like any other person in Zimbabwe, Mureri enjoys the fundamental freedoms and
human rights that he can enjoy without fear of persecution or targeting from
state or none state actors.

“We are
closely monitoring the situation,” said ZLHR in an alert.