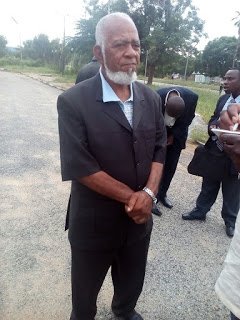 As the Mwenezi East parliamentary by-election scheduled for April 8, 2017 approaches, people may want to know more about the candidates who will lock horns in the election to replace the constituency’s late Member of Parliamnet, Joshua ‘Mazebra’ Moyo, who died in December last year.
The election will be contested by four candidates; Joosbi Omar of Zanu PF, Kudakwashe Bhasikiti of ZimPF, Welcome Masuku of National Constitutional Assembly (NCA) and Mango Turner of Free Zimbabwe Congress.
Below is a brief profile of the Zanu PF candidate Joosbi Omar:
Omar was born on September 24, 1953 in Masvingo (then called Fort Victoria) where he grew up.
His CV states that he is a ‘child of the struggle’ who, in the 1970s, worked underground with freedom fighters particularly in Zaka area, ferrying clothing and food for Zanla guerrillas.
He also worked with nationalists like Samuel Munodawafa, Simon Mazorodze and Nolan Makombe during the liberation struggle.
He became a member of the Zanu PF Mbuya Nehanda district at independence in 1980 and remained an active member of the party ever since.
He contested the Masvingo Urban seat in 2008 and lost to Tongai Matutu of MDC-T. In 2013, Omar lost the Zanu PF Masvingo urban primaries to Daniel Shumba who went on to win the seat in the general election of the same year.
Omar is a successful farmer and business person, being the executive chairperson of the J.S. Omar Group of Companies which consists of Livre Investments, Granary Civil Engineering, Granary Housing Construction, Baileys Diesel, Housewife’s Paradise, Sams Omar Clinic and Food for Africa.politics
Share
Facebook
Twitter
Pinterest
WhatsApp
Previous articleTwo Zvishavane miners scoop awards
Next articleMan bashes aunt, orders her to resurrect father