Mucheke Stadium and Dikwindi Primary School may soon need to be closed for some time to pave way for revamping the infrastructure, most of which needs to be built from scratch.
Speaking during a full council meeting on November 1, 2021, Masvingo Mayor Cllr Collen Maboke said Dikwindi Primary School’s deplorable state is no longer suitable for learning activities and may soon pose a danger to pupils. 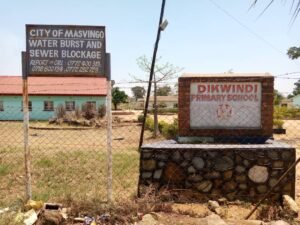 “It would be better to destroy the buildings to pave way for new ones that will be up to standard at the council-run primary school.
“The buildings are sub-substandard to such an extent that renovating them will be a waste of resources and the best solution will be to start building all over again.
“There were projects in the pipeline to build one block a year until finished but due to the economy it is impossible to do that. Council was supposed to build the second block from levies,” Maboke said.
Maboke also spoke on the dissatisfactory manner in which council is running affairs of Mucheke stadium which has suddenly been turned into a white elephant due to the dilapidated infrastructure.
“Turning to Mucheke stadium, if you look at the facility, the toilets and the playing turf are all in poor state. There is need to revamp the whole turf because the lawn is no longer conducive. The facility no longer meet the standards required even for hosting local premiership matches.
“If we do not address the issue, we will end up in the situation our national soccer team is likely to be in after continental soccer governing body, Confederation of African Football (CAF) hinted on banning hosting of soccer matches at the National Sports Stadium in Harare,” said Maboke.
Maboke said there was need for council to utilize the opportunity of non-presence of a local soccer team using the facility to do serious renovations.
“Why can we not utilise this opportunity for renovations and ensure standards are improved at the facility to ensure that it meets certain standards?” he said.
Ward 10 Councilor Sengerayi Manyanga proposed that council demand the payment of council levy for each learner at Dikwindi before being allowed into the classroom.
“Learners who would not have paid council levy, an amount of ZW$260 must not be allowed to attend lessons so that their guardians are motivated to pay fees which would help in improving infrastructure at the school,” said Manyanga.
In close proximity to the school sewage also flows, posing a potential health hazard to learners.