Mwenezi widow appeals for help after fire gutted her house down 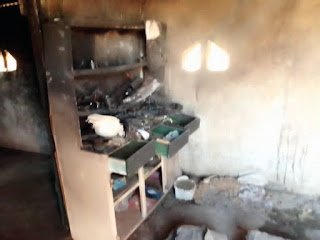 Mwenezi–A 45-year-old widow from Mukachana Village One in Mwenezi is appealing for help after her house and belongings including clothes and food were destroyed by fire.
Viola Shava, who is unemployed, lost all her property and food after the fire destroyed her house, which she shares with her three children aged 14, 13 and eight during the day on June 16 2021.
A teary Shava told TellZim that the devastating accident occurred when she had left her house around midday to run errands only to be called that her house has been destroyed by fire.
“At around 16:00hrs I received a phone call from my neighbors who notified me that  fire had engulfed and destroyed my house ,” said Shava.
She said she arrived home only to find the neighbors trying to put out the fire but the house and belongings had already been destroyed.
“I rushed home and when I arrived, my neighbors were on the verge of putting off the flames but most of the things had been destroyed,” said Shava.
The cause of fire is not yet clear but she suspects that the fire was caused by a solar battery which was on charger which she think could have exploded igniting the fire.
She needs help in form of food and clothes and well-wishers can contact her on 0779333114.
In January this year another widow from Village 10 in Mwenezi was left homeless after her house was gutted by fire.
Share
Facebook
Twitter
Pinterest
WhatsApp
Previous articleMan jailed for cutting sister’s boyfriend’s dreadlocks with machete
Next articleCovid-19 regulations should apply to all