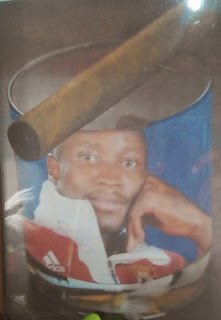 Masvingo-Zimbabwe national volleyball player Bruce Mpofu died and he was buried in Masvingo on Thursday this week. He was 30 years old.
Mpofu who was also working  for Mosweu and Company Legal Practise as a Messenger in Botswana suffered from a severe headache and he decided to come home but he died upon arrival in Masvingo last week. While in Botswana Mpofu also played for Mafolofolo Volley-ball Club in Gaborone.
Mpofu was a distinguished volleyball player in Masvingo. He worked at Masvingo City Council at Fire Brigade where he joined the volleyball team coached by the late Mr. Mazorodze of the Fire brigade.
National Volleyball Coach, Mr. Arron Mutede said Mpofu joined the national team in 2007.
” I received a phone call from the coach of the Big Six Labels, Mr. Mazorodze that he had a talented boy (Mpofu) in his team who deserved to be in the national team.  I called him Mpofu and he joined the national team in the year 2007 and served up until the year 2009, he then went to Botswana, but he still served as a National Team Player,” said Mutede.

Mr. Mutede added, “I discovered that the capacity of Bruce was of great importance the first time I watched a friendly match that was organized in Masvingo. I realized the potential that he had, he was a well disciplined player who encouraged other players to achieve and excel in the tournament.”
Mpofu joined the Mafolofolo club in Botswana in 2008, at the same time serving as a Zimbabwean National Volley ball Player.
Commenting on this heartbreaking incident that befell the nation, the second president of the national team, Mr. Enias Kondo said that, “Bruce was a role model in Masvingo as well as to other players whom he competed with in Zimbabwe and abroad. None other than Bruce reached that level in the province of Masvingo; he was the most valuable player in most matches played.”
In his lifetime, Mpofu won 13 medals and two most valuable player trophies with regards to his performance as a National Volleyball Player and Mafolofolo player. local
Share
Facebook
Twitter
Pinterest
WhatsApp
Previous articleMasvingo beef producers petition government over crocodiles
Next articleNGO Forum runs public information Kiosk in Masvingo