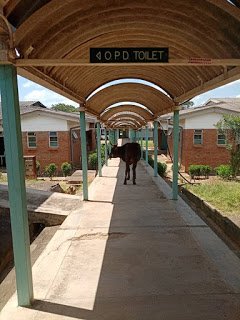 MWENEZI- The conditions at Neshuro
District Hospital continue to decline after it emerged that the district’s
referral centre has been operating without a functional laundry section and
kitchen.

Owing
to broken down electrical utensils, the hospital’s kitchen section is also in
shambles leaving cooks to rely entirely on firewood for preparing patients’
meals.

Main
roads leading to the hospital are full of potholes with the most critical one,
the TNP road, which links the hospital to the Masvingo-Beitbridge highway in
dire need of urgent attention.

In a
telephone interview, the District Development Coordinator (DDC), Rosemary
Chingwe acknowledged some of the problems haunting the district hospital.

She
told TellZim News that the government working with other development partners
was working to address the situation at the hospital.

“The
hospital’s perimeter fence is in bad shape but we have decided to start with
working on the water situation.

“So far
a borehole which was funded by Unicef with the support from government is at
the final stage of being set up and Africa Ahead is the one implementing the
process.

“Everything
is now ready, it’s only a few water tests which are yet to be finalised for the
borehole to be completely set up.

“After
working on the hospital’s water situation we will focus on addressing the
institution’s problems which include laundry section, kitchen and its perimeter
fence,” said Chingwe.

The
district hospital has for years been experiencing erratic water supply from Zinwa.

At one
point in time, owing to the water crisis, the pediatric section of the hospital
was temporarily closed with authorities also forced to cut-back on new
admissions.