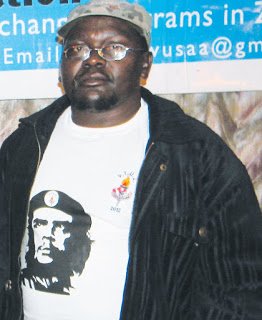 Upenyu Chaota
The Progressive Teachers’ Union of Zimbabwe (PTUZ) has come out guns blazing attacking the Zaka Primary School head Tawedzerwa Masase for threatening to use of violence against teachers and extorting money from them to sponsor Zanu-PF functions.
Sources say Masase has connections to the dreaded Central Intelligence Organisation (CIO) who last week took the PTUZ Provincial Manager, and teacher at the school, Eston Mathews for interrogation on allegations of inciting other teachers to defy Zanu-PF.
PTUZ President Dr Takavafira Zhou said the rights of teachers must be respected and there must not be any undue political interference with their work.
“It’s clear that schools are now an extension of partisan party politics through school leaders. How can a mere school head threaten to use violence against innocent teachers?
“As PTUZ we strongly condemn the actions of Masase and the CIO for interfering with teachers’ affairs. How can a headmaster force people to fund Zanu-PF functions? It all started a long time ago from the 21st February Movement celebrations when teachers were forced to pay US$5 each to fund the event,” said Dr Zhou.
He said Matthews had noticed that the abuse was going too far and had refused to give in, thereby putting himself on a collision course with Masase who then went and reported him to the CIO.
“He was inhumanely treated and beaten up and we condemn such actions in a democratic Zimbabwe. We condemn both the government for appointing the head on political grounds. We therefore call on the government to remove Masase from the school since he has failed to execute his duties professionally,” Dr Zhou said.
“We have gathered that Masase was linked to the 2008 election violence where innocent people like Simbarashe Chikomba were killed just because they did not support Zanu-PF.
“The government has to intervene urgently and protect the teachers at Zaka Primary from a deranged head. Education should be left to educators,” added Dr Zhou.
Zaka District Education Officer (DEO) James Mahofa professed ignorance over the matter saying he has not received the report yet.
“I haven’t heard about such a story. If it happened I am sure I will get the details then get back to you,” said Mahofa.news