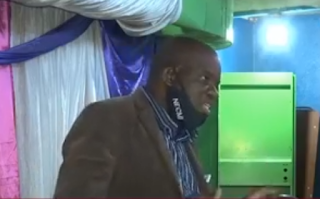 Some motorists who fear for serious damage of their
vehicles, have resorted to only use their vehicles in the Central Business
District (CBD) and hike back home.

Speaking at a TellZim News Engagement Meeting on May
15, 2021, Bhiza said most roads have become really bad and that council has
since started resurfacing its major roads.

“The state of our roads has deteriorated a lot,
but we have already started resurfacing some roads in the commonage, only that we
are doing it in phases because of limited resources. We have witnessed the
Aerodrome Road being resurfaced, together with several other roads.

“Let me not hasten to say that Council has just
concluded plans to purchase a new grader and a roller, and for your own
information, our challenge as council is that we did not have not have a grader
but since the city is now expanding as far as Beira Corridor and Gimboki we saw
it fit to have our own machinery,” said Bhiza.

Bhiza also revealed that tender procedures to
procure a new grader are now at an advanced stage and that council intends to have
a lasting solution to road rehabilitation.

He said Mutare City Council is also waiting for the
delivery of a tipper truck to increase the fleet.

“We have other trucks but they are not enough
to cover all the 19 wards that need urgent road rehabilitation. If we add the
tipper which we are expecting, it would make it easier and convenient to repair
roads in high density areas,” Bhiza said.

Bhiza said that they also plan to purchase an
additional grader and a bulldozer in future.

The local authority has established a new committee,
Business Investment Standing Committee which will deal with private players who
may want to invest and assist in the road rehabilitation exercise.