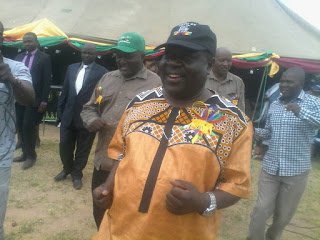 Rtd Lt Gen Engelbert Rugeje
…candidates miss Mugabe days
Upenyu Chaota
The chaotic Zanu PF primaries that saw some heavyweights being humiliated at the hands of some green horns in party politics have left President Emmerson Mnangagwa exposed, with many disgruntled candidates claiming that former president Robert Mugabe was way better at enforcing order and direction in the party during election time.
Disgruntled party supporters and candidates throughout Masvingo province have condemned the newly appointed national political commissar and former army boss, Rtd Lt Gen Engelbert Rugeje for the chaos saying he hurried the party into elections while he knew that he was not prepared for the task.
The shambolic primaries held last Sunday saw President Emmerson Mnangagwa’s top allies being booted out, with some losing candidates rating the internal polls as the worst in Zanu PF history.
Losing Masvingo North candidate, Elton Ziki had no nice words for the commissariat saying they did the worst job ever.
“The commissariat did a bad job and we do not fear saying it. Glaring irregularities, no system for recourse, vote buying, rigging, bad mouthing, blatantly biased police officers, missing names and intimidation.
“We are not amused at all. The only solution is a re-run or else the party will pay dearly,” said Ziki.
Another losing candidate who refused to be named said the party structures were in shambles and most of his supporters were missing from the cell register.
He said Zanu PF had signed its own death sentence by allowing chaos and vote buying to dominate the just-ended primaries.
“Zanu PF has literally signed its own death sentence. The commissariat has clearly failed to run the primaries and much worse the results are going to stand.
“We are likely going to have a rude awakening in the upcoming general elections. We have given the opposition a chance because a lot of people are disgruntled and a bhora musango is looming,” said one disgruntled candidate.
Other losing candidates blamed President Mnangagwa for failing to protect them yet they were in the trenches with him when he was being persecuted by the G40 faction before Operation Restore Legacy.
“This is something which Mugabe would not have tolerated. He always protected his own people not what we have witnessed in these primaries. How do you expect people to have faith in a party which has a losing national chairperson and advisor to the President?
“Rugeje has failed dismally and we cannot accept this primary election. A lot of people could not vote and some candidates were missing from the ballot. The party has clearly been infiltrated by the enemy,” said one disgruntled candidate who was missing from the ballot paper.
Repeated efforts to get a comment from Rugeje were fruitless as his mobile went unanswered.
Masvingo provincial chairperson Ezra Chadzamira defended Rugeje saying the primaries went smoothly despite some few glitches.
“Zanu PF is a popular party and everyone wants to join. The primary elections bear testimony to the overwhelming response we got from people who wanted to be our candidates.
“We had a little problem with our cell structures where some people were not able to vote because they were not in the registers. It is difficult to make all people in cell registers vote because you will never find all the people in one area at any given moment.
“Some candidates cry foul because they went on campaign trail before getting confirmation that their CVs had sailed through. This is the challenge which led to major problems when they found themselves missing from the ballot paper,” said Chadzamira.
Some of the big wigs who fell by the way side last weekend include Paul Mangwana in Chivi, Ailes Baloyi and Ronald Ndava in Chiredzi, former police boss Edmore Veterai in Bikita, Paradzai Chakona in Zaka and Professor Amon Murwira in Gutu.
The worst chaos was witnessed in Zaka East constituency where elections were not held as only two candidates appeared on the ballot paper but presiding officers refused to add names of those who were missing.
In Masvingo North constituency, the incumbent Member of Parliament (MP) Davis Marapira was accused of vote buying.
In Chivi North constituency, candidates exchanged blows over anomalies that were being experienced while in Chiredzi West, Gutu North and Gutu East, massive electoral malpractices were recorded, with losing candidates vowing to fight for the nullification of the results.
Taguma Benjaman Mazarire won in Masvingo Urban, Masvingo North went to Davies Marapira, Ezra Chadzamira won Masvingo West while in Masvingo Central Edmund Mhere went uncontested.
Killer Zivhu won Chivi South, Ephraim Gwanongodza retained Chivi Central and Mathias Tongofa won Chivi North.
Chiredzi West went to Farai Musikavanhu while Roy Bhila won Chiredzi North, Danford Masiya won Chiredzi East and Calisto Gwanetsa won Chiredzi South.
Zaka Central went to Davison Svuure, Zaka East was won by Caston Gumbwanda while Zaka North went to Robson Mavhenyengwa.
Elias Musakwa won Bikita West, Johnson Madhuku won Bikita East while Bikita South went to Josiah Sithole.
Mwenezi East went to Joosbi Omar and Mwenezi West went to one Zindari.
Winston Chitando went uncontested in Gutu Central while Pupurai Togarepi won in Gutu South and Gutu North went to Yeukai Simbanegavi.top news
Share
Facebook
Twitter
Pinterest
WhatsApp
Previous articleParkinson’s: What you need to know
Next articlePrimary election rerun looms in Zaka East