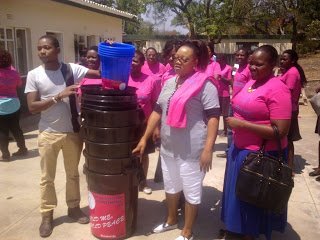 By Moses Ziyambi
The Student Christian Movement of Zimbabwe (SCMZ), a civic organisation concerned with female students welfare, hosted a workshop at Great Zimbabwe University (GZU)’s Mashava Campus where they urged the undergraduates at the institution to remain focused.
Running under the theme “Safe Spaces for Students Campaign”, the event which was part of an going series of nationwide awareness campaigns saw the guests deliberating on issues of gender and gender-based violence. Students were also urged to be pro-active in issues of gender and the creation of an environment safe for learning.

Speaking at the event, SCMZ national coordinator Douglas Tigere urged female students to value their studies above all else and ignore possible distractions they encounter.
“This campaign specifically targets female students and as an organisation, we expect you to live up to the expectations and overcome all the pressures that you come across despite that you don’t have your parents and guardians with you,” said Tigere.
“We call upon each and every one of you to remember your circumstances and shun short-time pleasures that may ruin your future,” said Tigere, alluding to reports that some girl students end up selling their bodies to afford niceties.
He encouraged both female and male students to work together to ensure a peaceful environment suitable for female students to learn freely.
“Our aim is to ensure that these sisters of ours have freedom to participate in class without being subjected to any form of prejudice. Let us also personalise the issue of gender violence so that we take it not as a problem for females alone but as a problem for all of us,” added Tigere.
Speaking at the same event, Sister in Charge at the Students Medical Centre Zvinake Tavuyanago advised students to be steadfast in pursuit of their education and to be satisfied with what they have.
“We must learn to manage with the little that we have and avoid rushing to catch up with our more privileged colleagues. If we do that we become vulnerable to older people who may take advantage of us especially our girls,” said Tavuyanago
“As girls, let’s learn to be assertive – a no must be a no,” added Tavuyanago.
The event also saw the movement donating refuse bins for use by the university community.

Douglas Tigere (left) handing over some bins to GZU Mashava Campus director
On the sidelines of the handover ceremony of the refuse bins, Director of Mashava Campus Sarafina Mudavanhu commented SCMZ for its commitment to a clean environment.
“As a Christian organisation they are promoting a clean environment as it is said that cleanliness is next to Godliness. I am pleased by the message that they are sending,” Mudavanhu said.
Formed way back in 1962 to support black disadvantaged students, the movement has survived with the goal of building a God fearing and democratic society in which young people have access to equal development opportunities.Local
Share
Facebook
Twitter
Pinterest
WhatsApp
Previous articleCity council embarks on fast track budget preps
Next articleCouncil fails to attract people to budget consultative meetings