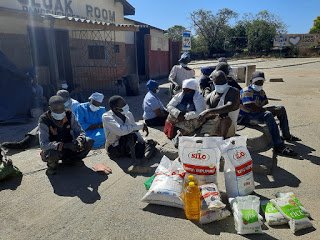 Mucheke
squatters recently received help from Social Economic Action Transformation for
Humanity (SEATH), in the form of food parcels which the organization won in an
online competition.

The
donation was a fulfillment of the organization’s promise to maintain its
presence among the most disadvantaged people of Ward 1 in Masvingo Urban.

The
homeless people received mealie-meal, salt, sugar, rice and cooking oil which
will last them for some weeks.

Some
of the squatters at Mucheke bus terminus are persons with disabilities who earn
a living by begging on the streets and most of them are victims of stigma due
to their conditions.

The
donation was made possible after aspiring SEATH legal officer Trust Tariro
Mafuka won $5 000 in a Twitter competition ran by youth bank Empowerbank.

“I
competed for the $5000 hamper which was promised to any follower who was going
to attract as many likes, retweets and comments by tagging many others Twitter
users. I had to follow, comment and tag as many friends as I could. My wish was
to win the hamper and donate it to people with disabilities at Mucheke bus
terminus, something which I managed to do at last,” said Mafuka.

SEATH
Trust director Tendai Mafuka said she was glad that the promise made to the
disadvantaged people at the bus terminus was fulfilled, thanks to the support
of the organization’s stakeholders.

“We donated to the Mucheke squatters to fulfill
our promise of having a sustainable relationship with persons with
disabilities. We are also continuing with the movement of Ubuntu and enhancing
the lives of vulnerable persons by giving them hope that there is a better
tomorrow if we all work together,” said Mafuka.

The
ambassador of young people with disabilities Vimbai Chese expressed her
gratitude for the donation, saying it will go a long way in creating hope among
the beneficiaries who face many challenges in their quest to simply get by.

“This donation improves the material
conditions of these people, and I am very happy that it
also creates hope among them that society has not forgotten about them. We all
need hope and support to survive the day,” said Chese.