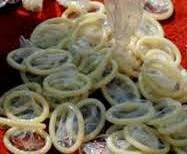 Gwanda- Commercial sex workers in Gwanda are allegedly to be making a killing out of sperms they get from their unsuspecting  clients.
Most of the sex workers interviewed did not deny the allegations saying 15ml of sperms was going for US$ 25. They said their buyers were haulage truck drivers who take the sperms to South Africa where they would re-sell to other foreign nationals.
One sex worker identified as Chipo said she is now residing at a local hotel where she was making quick money from clients who pay her US$ 5 for the usual business.
“We are making a lot of money out of selling sperms. I always make sure that I use a female condom since at times I run a loss as some of my clients don’t want to leave behind their used condoms, so using a female condom has become a good strategy,” she said.

“Prostitution is paying here in Gwanda I have invited my cousin who failed her O’level in 2013 to come and join me in business, and she can also testify that business is good here. There is nothing to complain about accommodation is very cheap here at this hotel,” she added.
Tell Zimbabwe was informed that truck drivers give special containers with the sex workers which would be used for the safe storage of the ‘product’.
Although the real reason for buying sperms could not be immediately established, it was widely believed that they are being used for either juju or manufacturing some expensive cosmetics that makes the skin to become smooth.local
Share
Facebook
Twitter
Pinterest
WhatsApp
Previous articleFour Chingwizi flood victims jailed for five years
Next articleMovie Auditions