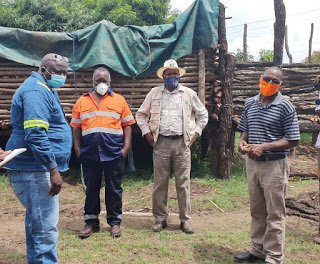 CHIREDZI – Minister of Lands Dr Anxious Masuka has said
that Zimbabwe loses about 450 000 metric tonnes of maize to stock feed saying
during poor farming season, millers prioritise venturing into the production of
stock feed because it is an uncontrolled area.

Dr Masuka, who was accompanied by Minister of State for
Masvingo Provincial Affairs and Devolution Ezra Chadzamira, last week toured
the 3 000 hectares of maize and sorghum at Tongaat Hulett Zimbabwe’s Hippo
Valley and Triangle Estates.

Dr Masuka said that the country achieves food security by
growing sufficient maize and reducing competition between people and livestock.

“Millers in bad years prefer to do feed because they
make more money since it is not controlled. So we are saying that millers
should use traditional grains as alternative to maize so that maize becomes
available for people so we need more of this (traditional grains),” said
Dr Masuka.

Tongaat Hullet Zimbabwe, through its commitment to fight
hunger in Masvingo province, increased its hectrage from last season’s 327
hectares, where it delivered 1 186 tonnes of maize grain, to 2 400 hectares of
commercial maize this year.

Winter maize project was introduced by the then Governor for
Masvingo province, Josaya Hungwe, after the 1992 drought.

Tongaat agriculture general manager, Tarisai Mudambanyuki
said they have since harvested 1 300 hectares, where they have delivered 900
tonnes of maize grain to GMB and have since shelled 1 900 tonnes.

“We have committed a total of 3 000 hectares of which 2
400 was planted with commercial maize which we are currently harvesting. We
have harvested about 1 300 hectares and to date we have shelled about 1 900
tonnes and delivered 900 tonnes which is more than what we delivered from last
year’s crop,” said Mudambanyuki.

Since 2018, THZ had been partnering Masvingo Development
Trust (MDT) to produce winter maize.

This year, from the 3 000 hectares devoted by THZ, 1 000
hectares was grown under partnership with MDT.