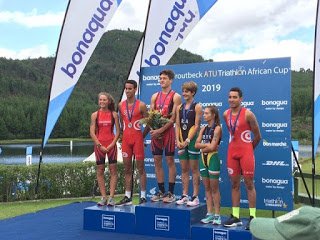 MASVINGO– Many sporting disciplines in the country haven’t been doing well when it comes the tapping and nurturing of young talented athletes who happen to be future stars, but Triathlon Zimbabwe (TZ) is now in a drive to do away the perception that the sport is for the elite.

TZ is setting its eyes at expanding its base across Zimbabwe and make the sport more familiar in schools and other areas where the sport is little known.

The sport has been attributed to the elite, but TZ is out to change that myth and make the sport more popular in high density and marginalized communities in Zimbabwe.

This came out during an online Bonaqua Triathlon online familiarisation workshop held on Tuesday, July 6, when journalists interacted with the sport’s local leadership and sponsors to learn about the developments being made by TZ.

Speaking during the workshop Triathlon Zimbabwe President, David Ellis said they were burdened by the need to tap into young talent and revealed that they were sending TZ representatives to schools across the country.

“It’s something that we always have at the back of our minds. Aquathlon has become very popular in schools starting last year because it allows the kids to only do the run and swim element of Triathlon. We do send some of our representatives to schools to encourage the sport. We also have the duathlon aspect for the guys who do not like swimming which we are trying to push a lot. We have a few bikes that we have given to some local guys to try and encourage them,” said Ellis.

These sentiments were also shared by Zimbabwe Olympic Committee (ZOC) Chief Executive Officer (CEO) Stephen Mudawarima, who said there is need to target young triathletes starting now so as to have enough to prepare for future international events.

“With these kind of dedicated corporate sponsors we now need to look at some of the young talent which we have and directly support the talent. Working through with the sponsors we should be able to get certain athletes on scholarships. For long term impact we now have to look at the Under 13, 15 and 18 as we target the Paris 2024 event,” said Mudawarima.

The most popular triathlon event in the country is the Bonaqua Africa Triathlon Cup which is held at Troutbeck in the Eastern Highlands annually, with this year’s event expected to be held on September 25.

The event’s main sponsor is Bonaqua which has been sponsoring the event for the past four years, having taken over from Schweppes, another Coca Cola subsidy.

TZ also signed a Memorandum of Understanding (MoU) with the City of Harare as it seeks to spread its wings and maintain infrastructure.