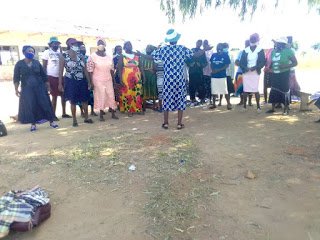 MASVINGO- Masvingo Rural District Council (RDC)
Ward 14 Zanu PF councillor, Cornelius Gwinji has challenged female politicians
in Masvingo to break the barriers and scale up their efforts of occupying
political positions, as the nation braces for 2023 elections and potential
by-elections this year.

This came out during a Zimbabwe
Electoral Commission (ZEC) and Women’s Coalition of Zimbabwe (WCoZ) voter
education meeting for women on Monday, May 26, in Zano area.

Speaking during the meeting cllr Gwinji
told women to desist from discouraging each other and work in unison if they
want to have more females occupying political positions at local authority and
parliamentary level.

“Some of you think that they can’t
contest an election and they always give an impression that male politicians
should be voted for. That is not true, you have to work together and support
one another to take up these political posts.

“I will be very happy to see a woman
contesting with me on a level political field. The best person should win an
election regardless of their sex. Its high time you coordinate among yourselves
and work to promote each other,” said Gwinji.

ZEC District Elections Officer (DEO)
Gertrude Murumbi who was the key note speaker also called upon women and youths
to register to vote since the elections board gave a greenlight to voter
registration processes.

“As ZEC we have opened all our branches
for voter registration and I urge all of you here to go and register to vote.
Our offices will be open for those who want to register and check their
registration status. Everything will be done in compliance with the set
Covid-19 regulations so feel free to approach us,” said Murumbi.

WCoZ Masvingo provincial coordinator,
Belinda Mwale said the 2023 elections as well as the pending by-elections
should be the defining moment for women where they should rise up to the
challenge.

“A woman should support a woman because
if she succeeds all of us will have succeeded. We reiterate that we must stop
the pull her down syndrome. We are against the women’s quota system because we
want to face men head on and prove that many women are capable of winning an
election,” said Mwale.

ZEC and WCoZ are in a drive to improve
voter education and awareness amongst women and youth who constitute a large
percentage of the country’s electorate.

The elections board is expected to hold
a number of local authority by-elections, when the Covid-19 situation gets
normal as directed by the Ministry of Health and Child Care which recommended a
ban on all electoral activities during the peak of the pandemic.

Masvingo is expected to hold two
parliamentary by-elections for Chivi South constituency seat which was previously
held by Killer Zivhu who was expelled by Zanu PF and Mwenezi East which was
occupied by Joosbi Omar who died last year.