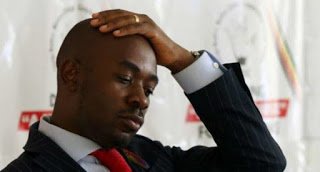 …Mnangagwa
will win by more than 5 million votes in 2023

While
MDC Alliance leader Nelson Chamisa is down and bruised after two officials
defected to Zanu PF, the ruling party has come out rubbing more salt to
Chamisa’s wounds claiming that the top officials have been in the political
wilderness and have returned home.

Blessing
Chebundo, who got famous for trouncing President Emmerson Mnangagwa in the Kwekwe
parliamentary election back in 2000, was joined by former MDC Alliance senator
Lilian Timveous in defecting to Zanu PF early this week.

The
defection has send shockwaves in the rank and file of the MDC Alliance with
Zanu PF savoring the moment saying the duo has seen the light and others should
follow suit.

Zanu PF
national political commissar Victor Matemadanda, after receiving his first dose
of the Chinese SinoPharm Covid-19 vaccine in Masvingo yesterday (February 24),
told journalists that he was excited that the duo had come back home and it was
a huge boost for the ruling party ahead of the 2023 elections.

“Those
were not defections. I call that people coming back home from the diaspora.
Zanu PF is the home. If someone goes to diaspora and then decides to return
home, you do not ask where they were but you take comfort in the fact that they
are alive and well.

“We are
very excited as a party that people of the caliber of Cde Timveous (Lilian) and
Cde Chebundo (Blessing) have come back home.

“For your
own information, before the formation of the MDC, Cde Chebundo was a Zanu PF
district chairperson in Kwekwe and so it just like home coming so we are very
happy,” said Matemadanda.

He said
the move by Timveous and Chebundo will pave way for others who were still in
the political wilderness to come join Zanu PF.

“This
is going to show some people that are still in the wilderness that home is home
and home is best,” said Matemadanda.

He said
President Mnangagwa will gunner more than the projected 5 million presidential votes
in 2023 elections as more people keep coming back to join Zanu PF.

“The
writing has been put on the wall and it is very clear for everyone that we are
going to surpass our target of 5 million presidential votes.

“Our
message to those in opposition is that come home and home is Zanu PF. Many
people are now realizing that they can no longer stay on the outside and are
flocking home,” said Matemadanda.